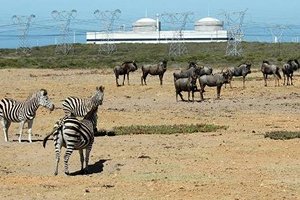 Eco-friendly? Koeberg's PBMR project never got off the ground.

Another remarkable innovation in nuclear energy is the pebble-bed reactor, variously described as the " politically correct atomic reactor" [pdf], or the nuclear power plant you could leave in the hands of Homer Simpson.

The idea isn't new, it was first demonstrated in 1967. But with traditional concerns about nuclear plants (such as meltdown) made moot by the inherently safe design, it's curious that pebble-bed designs are not common. It seems they should be as common as neighbourhood transformer stations. (Reactors used in nuclear-powered icebreakers are as small as 35MWe.)

South Africa last month signalled it would end its 11-year PBMR (Pebble Bed Modular Reactor) project, shedding most of the 800 staff working on the project.

China and Germany continue to develop designs similar to the PBMR. 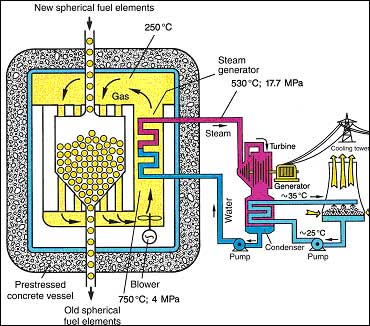 "It's always the bridesmaid," says Grimes. "I'd like to see it developed. As scientists, we need that flexibility of technologies going forward. PBMR is inherently safe and it's modular. But the small LWR reactor designs are also modular in the same way, and in terms of safety, the AP1000 has equivalent safety features such as passive cooling. The advantages of PBMR are definitely starting to be clear in the LWR design. That's taken the wind out of its sails."

"In a traditional reactor design, the decay heat – once fission has been turned off – is enough to destroy the reactor core. There are two things you can do - even if you lose your water, you can have a passive water volume that flows through the reactor from big tanks on the roof. You don't have to do anything - it's a passive process. Even though water's running out, it's removing the decay heat. It is exponential decay - so the residual amount of heat is no longer a threat. However there are additional features - natural convective processes that keep water moving around outside and keep the vessel cool. It's really simple."

Nuclear still leaves proliferation problems, but as Grimes points out, "nothing is proliferation-resistant, there are just degrees of it."

If you absolutely must keep using those proprietary formats, walk this way
Applications19 Aug 2022 | 9