$8.9m poker prize up for grabs - humans only please

Why can't a bot play at this level?

The biggest deal in the poker calendar kicks off tomorrow, but only humans will be allowed to sit in on the final table of the World Series of Poker's main event.

This Las Vegas knock-out tournament whittled 7,319 entrants down to nine back in July, and after a four-month wait to build media interest in the mainly no-name internet-honed players, this merry band can now get down to playing for the $8.9m (£5.5m) top prize.

But has poker bot development reached a level where a bot could be in with a shout for this prize?

The short answer is not yet, unless it got lucky. (Repeat this mantra after me: Poker is a game of skill. In the short term, luck can override skill, but over time a good player will take a lesser opponent to the cleaners.) 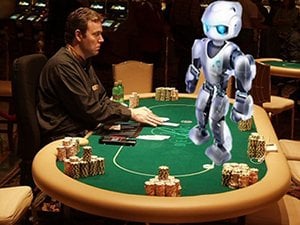 Poker Research Group's bots can beat anyone at two-player

The world's leading poker bot developers are quite clear about where they are right now. Dr Michael Bowling, who heads up the University of Alberta's Poker Research Group (the undisputed top dogs in this field) says: “For two-player limit poker, computers can beat pretty much the best in the world right now.”

He means his teams' computers. And the real clue to the situation is in the phrase “two-player limit”. This means just two players, and limit means the bets are limited in size and follow a set structure. No-limit means a player can chuck all his chips in the pot. So how about no-limit games or multi-player games?

“Most of our effort has gone into no-limit games,” says Bowling. “We've taken the same ideas that have been successful in two-player games and are moving them over to multi-player games. That progress has been slow.

So how good are the bots? “Our no-limit program is probably at a very strong amateur level, not at a professional level,” he says. He believes that in a couple of years, in no-limit games, his team will be able to approach its success of 2008 when Polaris, the collective name for the group's bots, came out ahead competing against six of the world's best heads-up (two-player) limit players. The score was close: three wins to Polaris, two to the pros, and one draw.

And the level of play against more than two-players? “We're at mid-range amateur level. Nothing particularity spectacular,” says Bowling. “We're missing some key insight and I don't know where it is going to come from.”

And if you're stupid enough to ask about multi-player no-limit bots... “We're not working on that. Those two issues are fairly orthogonal, and there's nothing particularly scientifically interesting about their combination. If we can handle those two issues separately there's no reason we wouldn't be able to put them together,” he says.

But there's no reason why, if it was entered, Polaris couldn't get lucky and make the final table. This applies to all the nine players who are at the final table – they got lucky with the cards, but they then knew enough to know what to do with them.

A reason not to bother entering our bot though is that it costs $10,000 to enter, unless you win. ®