Particle-punishing boffins at the Large Hadron Collider - the most outrageously powerful matter-rending apparatus and largest machine of any kind assembled by the human race - have switched ammunition. The colossal superconductor massdriver cannons of the LHC are now firing "fully stripped" ultrahypervelocity lead projectiles rather than comparatively insubstantial hydrogen ones. 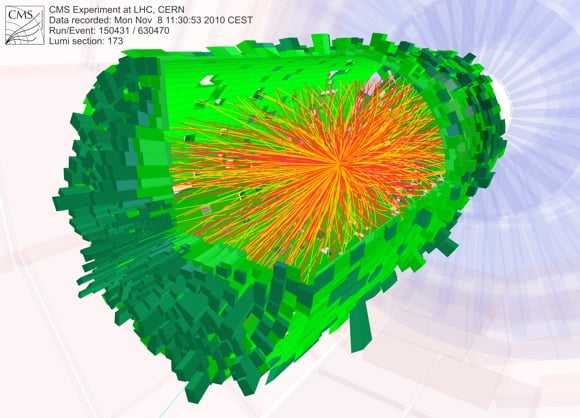 Yes, we expected it to do that.

An incident during preparations for the change to heavy-ion operation, in which a visiting journalist* was unable to resist the temptation to press a large red button during a tour of the control room at the ATLAS experiment, appears not to have had any serious effects.

One need hardly add, of course, that the switch to heavy-ion operation at the colossal particle-puncher was thought likely among the tinfoil-chapeau'd community to lead to the destruction of the planet Earth and extinction of the human race - in this case perhaps by producing "negative strangelets" which would "provoke the ice-9 reaction [that] destroys the world throwing a new type of water that freezes the planet, since an ice-9 reaction will condensate the planet in a 15 kilometers ultra-dense strange star". (Or alternatively by creating a "quark-gluon liquid" which would function as the "detonator of a mass-bomb" capable of blowing up the entire solar system. Etc.)

But there's no need for panic, as every major or minor event at the LHC attracts colourful doom predictions: the turning on of beams, power increases, first collisions, probably the installation of a new coffee machine at CERN - all these will generally lead to worried tinfoilers issuing demented predictions to the effect that the planet or indeed the entire universe will explode, implode, turn to soup, be abruptly compressed to the size of a marble or succumb to a collaptic energy ring devil-particle event.

You'll hear no such hysterical ramblings from us here on the Reg boffinry desk, particle-molestation subdivision. We have been briefed directly by top CERN boffins, and we give you the straight info: the LHC does not and never will present any type of planet- or universe-destroying mishap risk - though there is apparently a chance of an interdimensional portal incident of some type, possibly involving invasion of planet Earth by teleporting, rumbling juggernaut-spheroid creatures from the Fifth Dimension. (We may not have fully grasped that last bit: sadly from a news viewpoint it appears that the juggernaut-men would be so minuscule and exist so briefly as only to be apparent to mighty detector instruments.)

In any event, the transition to shooting lead rather than protons at the LHC was carried out smoothly at the weekend, with first collisions on Saturday according to CERN internal reports. Even as this piece is written, tiny bullets are crashing into one another head-on at the speed of light inside the mighty instrument caverns of the Collider, causing large amounts of coloured lines to go everywhere (live images can be seen here and here).

Erratic apocalypse prophet Luis Sancho - a confederate of the infamous Walter L Wagner, well-known for his attempts to get Hawaiian courts to shut the Collider down - has now moved his Doomsday forecast date back to tomorrow: or "certainly, within decades" (see final para - we can't recommend reading the whole post). ®