As world+dog rumored it would, Apple released its latest update to Mac OS X Snow Leopard on Wednesday: version 10.6.5.

Enhancements include improved Microsoft Exchange reliability, a variety of performance and stability improvements, security fixes, a couple of Bluetooth tweaks, and — in answer to some Mac Pro owners' prayers — systems with a Mac Pro RAID Card from early 2009 can now be put to sleep.

And, no, we don't mean with a bullet in the brain, we mean at Apple Menu > Sleep. 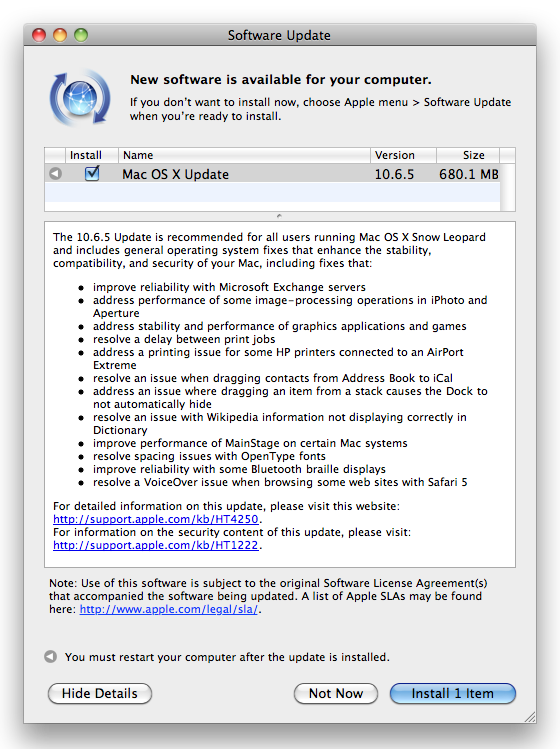 Remember, update sizes vary from Mac to Mac — this one is for a 27-inch iMac

10.6.5 also comes with a ton of security fixes — by our count, for 134 separate vulnerabilities in everything from Adobe Flash to MySQL to Apache.

You can find more information on the update at Apple's About the Mac OS X v10.6.5 Update page. You should also soon be able to download the installer from the Support Download page. As is Apple's tradition, updates to that page trail the release of the updated OS — which you can obtain by simply going to Apple Menu > Software Update and letting your Mac take charge.

And remember, back up before you update — but you're a Reg reader; you already knew that. ®