Review Every Christmas it seems a must-have toy or gadget splits people into the haves and have-nots.

Only this year things are slightly different. Little Johnny might be overjoyed to find Santa has left a shiny new Xbox 360 Kinect under the tree, but imagine his heartache when he realises his living room isn't large enough for his parents to play along.

That's Kinect in a nutshell. You either have enough space to play Microsoft's motion controller or you don't. Not such a problem in the grand sitting rooms of America, but a distinct one in more modestly sized European or Japanese households.

Take my humble abode, for example. An average Victorian terrace, the living room is roughly 4m by 4m. With a sofa and - admittedly clunky - TV stand reducing available floor length, I managed just 2m between the Kinect sensor and the front of my sofa. Despite an advertised minimum distance of 1.8m, however, several times during testing my calves were firmly pressed up against the bottom of the settee, as games forced me into Kinect's optimum play space, which for adults is between 2.4 and 3m.

For all you Pythagoreans out there, you'll be pleased to know that placing the sensor on top of my 37in TV rather than level with its stand brought the optimal play space forward by around 23cm, improving Kinect's overall responsiveness. But a claustrophobic feeling remained, as my arms and legs flailed worryingly close to the sofa. Of course, that same theorem also means that taller adults need to step back even farther into that optimal zone. 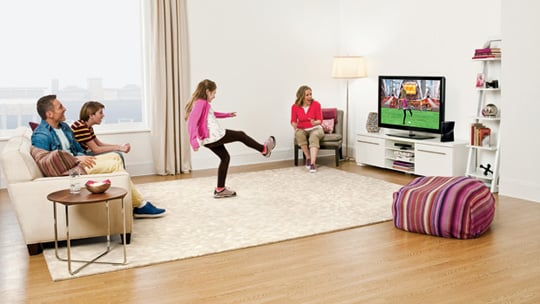 Santa, can I have a bigger house, please? I have been a very good boy...

Width also comes into question, but only when playing two-player games. Players standing side-by-side are going to need at least 61cm of clear lateral space on either side – approximately 2.4m of floor width. And while I personally didn't experience any issues with width, it's a measurement to be considered in other households.