1976 Jobs garage tech can be yours

Forgotten Tech An original Apple 1 made by Steve Jobs and Steve Wozniak in Jobs parent's garage goes on the auction block in London this month.

The Apple 1 was designed by Jobs and Steve Wozniak in 1976. Just 200 were made, according to the website Old Computers, and up to 50 are thought to survive.

Lot 65 has its original packaging, with the garage's return address on the typed label. Also included are the original manuals, a letter from Steve Jobs and an invoice dated 12/7/76. 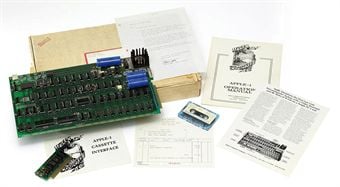 Apple 1 - It could be yours

According to Christies, the Apple 1 was the first pre-assembled PC - no soldering required. As you can see from the picture above there was no casing, monitor, power supply, or keyboard. But in principle, it worked out of the box.

We have lifted the picture of an Apple 1 with lovely wooden casing from Wikimedia, so you can see what it looked like in anger. 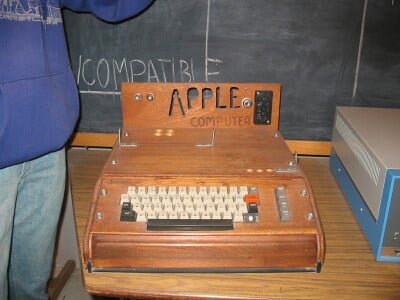 The website Old Computers has more about the Apple 1 spec.

Christies has assembled a strong list of works - composed by iconic names from the science and technology worlds - and another rare bit of kit for the Valuable Printed Books and Manuscripts auction on November 23.

Lessons learned could be applied to a next-gen fighter, says company
Systems7 Feb 2023 | 3

You may have already known this... but did you know you'll lose data migration unless you switch to paid?
Applications7 Feb 2023 | 22