SC10 If you want to sell supercomputers these days, you need to have a GPU story to tell. And Big Blue has been telling a story about a blade server for GPUs for the past several months, but unfortunately it doesn't actually have the product ready.

However, in about a month this BladeCenter GPU expansion blade is coming to market, initially as a special bid product and not with the full product name that other IBM blades get.

It looks like IBM is testing the GPU waters rather than jumping in, and for good reason.

The company is obviously eager to sell its BlueGene/P massively parallel clusters (which might be at the top of the Top 500 list if it weren't for these damned GPUs) or the "Blue Waters" Power7-based monsters to customers instead, and then fall back to the existing iDataPlex rack-ish blade-ish servers, which got their support for GPUs back in May.

This may seem odd for a company that spent so much time and effort designing, selling, and using the "Cell" Power-derived accelerators for game consoles and the first big hybrid x64-accelerator supercomputer, the petaflops-class "Roadrunner" super at Los Alamos National Laboratory. IBM has long since-killed off Cell for its own internal use, but it has not exactly embraced any particular GPU or co-processor to replace it.

One more thing before diving into the new GPU blade. The iDataPlex machines are a hybrid that borrows concepts from both rack and blade servers, and with the dx360 M3 machine that came out in May, the two-tray server allowed two Nvidia M1050 or M2050 single-width fanless GPU co-processors to be slid into the upper tray in the unit and attached to a two-socket Xeon server in the lower unit. With 84U of space in its non-standard cabinet it is half as deep as a standard rack, but twice as wide and offers 43.25 teraflops of GPU oomph using the M2050 at double-precision floating point. By the way, all iDataPlex systems are sold on a special bid basis, like the GPU blade IBM is now announcing, and Big Blue did not provide pricing for the iDataPlex Xeon-GPU combo.

The BladeCenter GPU expansion blade does not interface with any and all of IBM's Xeon, Opteron, or Power blade servers, but only with the plain-vanilla HS22 two-socket Xeon 5500/5600 blade server. The GPU expansion blade snaps into a high-speed I/O slot normally used for riser expansion cards, and the way IBM has designed it, up to four of these GPU blades can be snapped together and then linked to a single HS22 blade server for a five-wide hybrid computing element.

Here's what the HS22 blade and the GPU blade look like: 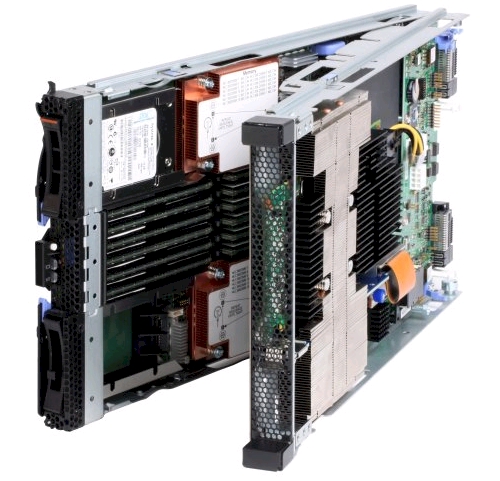