By the way, IBM's announcement letter for this GPU blade says only three can be stacked up, but prior reports from IBM as well as its tech documents say it is four, not three. The BladeCenter GPU blade seems to be a variant of the PCI-Express I/O expansion blade that Big Blue has been selling for some time, which also snaps up to four wide for PCI-Express 2.0 expansion on a BladeCenter blade server. This expansion blade is supported on the Xeon 5500/5600-based HS22 and the Xeon 7500-based HX5 blades. IBM's own Power7 blades (PS700, PS701, and PS702 by the IBM names) can't use this expansion blade, and Big Blue stopped making interesting Opteron-based blades several years ago after doing some actual engineering with the LS22/LS42 blades.

Each GPU blade can be equipped with a single fanless co-processor from Nvidia, with only the double-wide M2070 and M2070Q GPUs supported. (IBM did not explain why it did not use two M2050s, but it probably has to do with air-flow and heating issues.) The M2070 and M2070Q GPU co-processors are fanless models rated at 515 gigaflops of aggregate peak floating point number-crunching power and have 6 GB of GDDR5 memory; they are rated at 225 watts. The Q in the model means that it not only has features to use the CUDA environment to dispatch calculation work to the Fermi processor on the GPU, but also can load up the Quadro drivers for regular GPUs and be used as a visualization engine.

The reason why IBM hasn't put two M2050s into the blade is obvious when you look at this shot of the device: 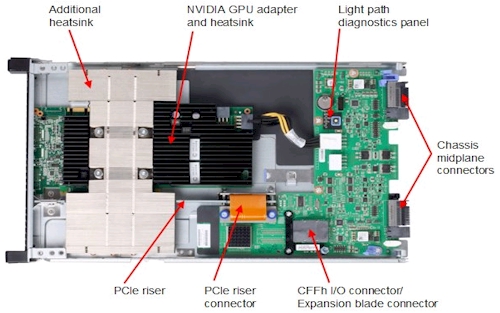 Look at all that heat sinkage. If these GPUs were not so hot, you could pack two of them in there. And if you are only going to be able to put one in the box, you might as well put in the more expensive one with the fatter GDDR5 memory.

The BladeCenter GPU expansion blade will be available on December 13. It is supported by Red Hat Enterprise Linux 5, Novell SUSE Linux Enterprise Server 11, and Microsoft Windows HPC Server 2008 (both the initial and R2 releases) as well as the normal Windows Server 2008.

IBM list price for this GPU expansion blade is $6,899. Because the M2050, M2070, and M2070Q GPU co-processors are designed for servers and to be OEMed and embedded into server products, Nvidia does not provide list prices. But the C2070 GPU that plugs into a PCI-Express 2.0 x16 slot and that has a fan only runs $3,999. That $2,900 price difference is a pretty hefty premium to charge for a big heat sink, some bent metal, and diagnostics to plug into the BladeCenter chassis. Then again, it is also $27,596 for 2.06 teraflops, which is about the quarter of what you have to pay per teraflops for a massively parallel x64 or Power machine with a custom interconnect.

No word on when IBM might put FireStream GPU co-processors from Advanced Micro Devices into these expansion blades, but given the level of warmth IBM is currently showing AMD - with a single four-socket Opteron 6100 box coming out this year, and somewhat begrudgingly - you and lots of your IT friends will have to hold your breath a long time and actually turn Blue before IBM might consider it. ®