No hiding place - facial biometrics will ID you, RSN

Opinion One of the technologies that has been on a steadily accelerating price/performance curve is face recognition technology. A series of talks this year demonstrated just how quickly the software is improving.

Every year there’s an event in London called Biometrics. It’s a conference all about the state of biometric technology and is accompanied by an exhibition.

I’ve been going for a few years now, and I find it really interesting to walk the floor to see what is changing, to see which technologies are in and which are on their way out.

The state of the art can be illustrated by some of the examples given by the US National Institute for Standards and Technology (NIST) in their presentation on testing biometrics.

We're still some way from Hollywood-style biometrics where the FBI security camera can spot the assassin in the Superbowl crowd. The false non-match rate is still too high. In a database of a million people, if you are searching for me you will get back hundreds, if not thousands of false matches. But it is the trend line that is the important thing here, not the instantaneous performance, and the initial use case will be for searching much smaller databases anyway. Say I’m at a conference, for example, and I see someone I recognise but can’t remember their name: I point my iPhone camera at them (surreptitiously) and ask the LinkedIn app to search my network, or perhaps I ask the conference organiser to identify them. In either case, the system is searching a database of only a few hundred faces.

That trend line is unlikely to take us down to a yes/no: as The Economist recently noted, biometric systems do not provide binary for such answers. They are “probabilistic” and this makes them inherently fallible. The chance of producing an error can be made small but never eliminated. While confidence in the results has therefore to be tempered by a proper appreciation of the uncertainties in the system, nevertheless, in a couple of years time you’ll be able to search a database of a million pictures, looking for me, and get back a dozen hits: me and a few false matches that you’ll inspect. That’s good enough, I’d suggest, to radically transform the way we interact. You can see that we are heading into some new territory. Even entry-level consumer software such as Picasa or iPhoto has this stuff built in to it. 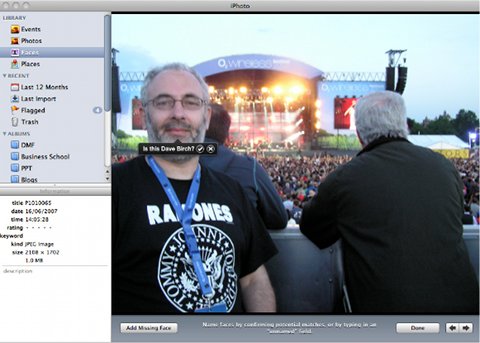 It's not perfect, but it’s pretty good. And these kinds of “passive” biometrics are finding their way into all sorts of places. Microsoft’s new games platform creates a 3D model of a player. One of the team doing this points to a prosaic use case: “It knows when they are sneakily trying to log into their older brother's account and trying to cheat the system... You can’t do it. Your face is the ultimate detection for the device.”