Has CERN made the VATICAN ANTIMATTER BOMB for real?*

So - Dan Brown's turgid blockbuster Angels and Demons, in which a nefarious papal official nicks a vial of antimatter from CERN as part of a complicated scheme to become Pope by menacing the Vatican with explosive destruction. Twaddle? Or actually a perfectly feasible plan ripped from today's headlines, style of thing? 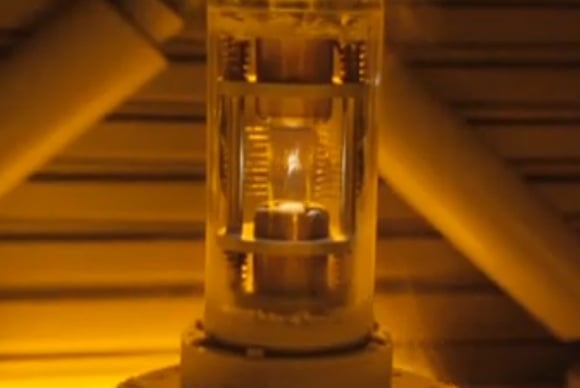 We here on the Reg particle-meddling desk naturally have no interest in the arcane Vatican rules of succession, the putative Illuminati secret society, the likelihood of finding a priest in the Pope's inner circle who would be capable of flying a helicopter etc.

We merely bring the matter up as it turns out that in fact there really is a team of scientists at CERN - the Organisation (formerly Conseil) Européenne pour la Recherche Nucléaire - striving to contain unprecedented amounts of antimatter: and they have just announced a major success in this extremely difficult undertaking. Could it be that Dan Brown has actually got one right? Would a tiny, pocketable amount of antimatter really be sufficient to rip the guts out of Rome in a blast equivalent to that of a small nuke?

On the face of it, yes. Antimatter reacts with normal matter to convert the entire mass of both into energy; it is the most powerful type of explosive possible, easily capable of making a global thermonuclear war look like angry cockroaches lighting their farts at each other.

Just a third of one measly gram of antimatter reacting with matter (for instance with the walls of its containment vessel) would cause a 15-kilotonne blast equivalent to that of the atom bomb which destroyed Hiroshima in 1945 - surely enough to wipe out the Vatican and quite a lot of Rome too.

QED: everything you read in Dan Brown books is true. Better still, the incomparably superior fiction of Star Trek might also be on the verge of becoming reality with antimatter at last available as a power source. As all Trekkies know, the Enterprise's warp drives were powered by a matter/antimatter reaction.

Whoa there! Not so fast.

First off, we're sorry to report that the international boffins of the ALPHA collaboration at CERN have succeeded in trapping only a sub-ultra-minuscule amount of anti-hydrogen, not even close to the milligrams range.

"We've been able to trap about 38 atoms, which is an incredibly small amount, nothing like what we would need to power Star Trek's Starship Enterprise - or even to heat a cup of coffee," says Rob Thompson, Canadian physics prof and member of the ALPHA group.

He's not kidding: each atom of nega-hydrogen masses something like 1.67x10-27 kg. Thirty-eight of them converted to energy according to Einstein's famous and pleasingly simple-enough-for-hacks equation E=mc2 tells us that should a rogue Vatican official manage to abscond with Thompson's antimatter stash and annihilate it in the heart of the Catholic Church, he would liberate approximately 11 billionths of a single measly joule. And in fact it's even worse than this: the ALPHA experiment didn't contain its 38 anti-atoms all at once.

Next page: CERN boffins not interested in Vatican - but have publicly speculated about planting an antimatter bomb in a government funding office
Page: