More fiber in the diet

Apple has applied for a patent that appears to be a tacit admission of a common complaint about its magical and revolutionary iPad: the Cupertinian slablet is just too damn heavy.

Apple's solution: a light-but-rigid body made not of aluminium, but of carbon fiber reinforced plastic (CFRP).

The patent application, "Reinforced Device Housing", issued Thursday by the US Patent and Trademark Office, doesn't mention the iPad specifically, but its illustrations make its target device unmistakeable:

Add an Apple logo and you've got an iPad

It must be said than the iPad's aluminum body doesn't account for all that much of the iPad's 680 to 730 gram heft, but seeing as how Apple's tablet has been derided as too weighty by geeks and normal humans alike, every gram counts.

The skin is described as being created of multiple CFRP layers in a cross shape, with the arms of the cross to be wrapped around the spine. To increase rigidity and help prevent the skin from cracking, the layers would have their fiber's "grain" running in alternating directions. 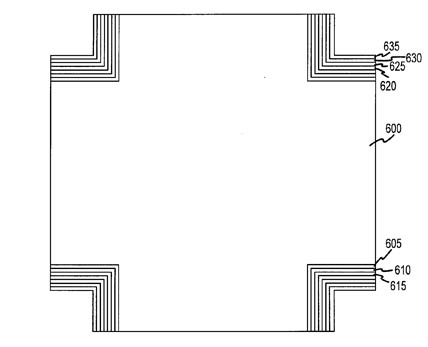 In addition to CFRP, the filing mentions the possibility of using other fiber-in-matrix materials, including aramids such as Kevlar, polyethylenes such as Dyneema and Spectra, polypropylenes, and "others."

No matter what material is used, anything that can put the porky 'Pad on a diet is to be welcomed. ®