A quarter century of DOS, don'ts, and delays

November 20, 1985, saw the launch of Microsoft Windows 1.01, the first publicly released version. Of course it was late.

Windows 1.0 is a funny little thing. I installed it into Oracle Virtual Box, running on DOS 3.3, and counted just 97 files in the Windows directory. There are no sub-directories. Some things are familiar - notepad.exe and calc.exe are there, as is kernel.exe.

Bundling application and system files into the same directory was a mistake, compromising Windows security from the beginning. The Windows folder is even the default location for saved documents. At the time Windows was not intended to be networked - the only nod to connectivity was a simple terminal application - so it seemed unimportant.

It all started here: the Windows 1.0 set-up

You can have multiple windows open in Windows 1, but they may not overlap. Still, you can minimise a window, and there is a clipboard for copying data between applications. Most important, it is a platform for applications with a graphical user interface, and with this release the battle for developer mindshare was on.

Windows 1.0 was not a success. Windows 2.0 in 1987 was better, arriving as it did with the first release of Excel, but it was Windows 3.0, launched in May 1990, that conquered the market for a PC graphical operating system.

Why did Windows win? There was competition, much of it technically superior. Apple had the Lisa, released early 1983, and then the Mac in 1984. On the PC there was not only VisiON, but also Digital Research GEM, first shipped in 1985, and which had considerable success.

As it turned out, both hit problems. VisiON was widely admired, but it was incompatible with DOS and required expensive custom development. Windows by contrast was a manager for DOS applications as well as a graphical platform in its own right. The Windows 1.0 shell was called MS-DOS Executive and ran DOS as well as Windows applications. GEM also ran on DOS but its progress was stymied by Apple, which sued claiming GEM was a copy of the Mac operating system. This caused Digital Research to weaken the GEM user interface. 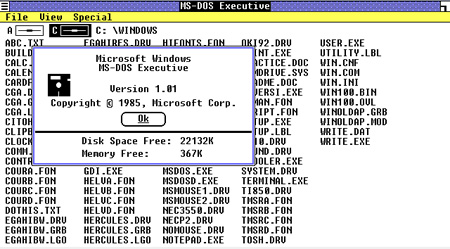 The OS/2 story played out well for Microsoft. OS/2 enabled Microsoft to remain IBM's partner, despite IBM's insistence on replacing DOS and Windows. Companies such as Lotus, WordPerfect and Ashton-Tate focused their development efforts on OS/2 rather than Windows, putting Microsoft's applications at an advantage.

In the meantime, Windows became increasingly popular. Version 3.0 in May 1990 was the first to exploit x86 protected mode, breaking DOS memory limits by allowing direct access to extended memory. Windows was doing so well that Microsoft's commitment to OS/2 was in question. During 1990 IBM took over most of the responsibility for OS/2 development, and Microsoft became a company dedicated to Windows.

Although Windows 3.0 and its successors 3.1 and 3.11 became the dominant PC operating system, it was not particularly robust or reliable, networking was awkwardly bolted-on, and security non-existent. Microsoft knew it had to rebuild Windows from scratch, and had been working on the project since 1988 when Dave Cutler was hired from Digital Equipment Corp. for that purpose.

Flaws in the DOS/Windows family might be forgiven on the grounds that its evolution was partly accidental. Nobody realised when Microsoft acquired QDOS (Quick and Dirty Operating System) in 1980 that it would end up as the foundation of PC computing. Windows NT on the other hand was Microsoft's opportunity to get it right. Did it succeed?