Not so much hard as a little bit wet

Can I help you attach it to your nipple?

With all that going on, how could anyone possibly object? The answer to that question comes in two halves. Firstly, the event feels curiously disjointed: a series of stands, each selling wares that are more or less related to sex and sexuality, without any great sense of cohesion. Although erotica is billed as a celebration of sexuality, it feels curiously detached, clinical. There is little sense of carnival, little intimacy, and very little of the participation and enthusiasm that would be familiar to those used to the wide range of amateur scenes that together make up the world of alternative sexuality in the UK today.

Secondly, Erotica has reached a point where it is famous for being infamous. Great was the outrage in the press last month when it was revealed that a pre-show party was to take place in the House of Commons. PR boob? Or highly-calculated PR gambit?

Thus, too, the RSPB returned to erotica for a second year, not just because the show’s demographic fits with that of their target audience, but because the highly predictable shock! Horror! from the tabloids at such a respectable organisation being associated with smut, and distributing t-shirts bearing the word "shag" (a purely ornithological reference) allows them to punch above their weight, publicity-wise. 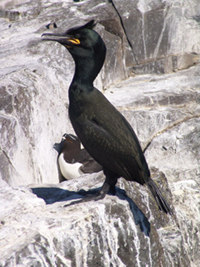 For much the same reason, satirical games innovator TerrorBull were there too. Expelled unceremoniously from most respectable gaming circles for their ironic "War on Terror" board game, their MD explained: "This is one of the few places we are still welcome".

So there it is: erotica is still going strong even if, like some of the costumes on display in the central arena, it is hard at times to discern what is still keeping it up.