Product Round-up Some might argue that, with music playback now integrated into most mobile devices, low-cost MP3 players are fast becoming surplus to requirements. Yet, despite a decline in sales, budget audio kit is still very much in demand this time of year, and manufacturers continue to bring new models out in a bid to compete with Apple’s dominance.

Moreover, the convenience of a pocket-friendly MP3 player – one that's going to be a lot cheaper to replace than a phone when joggers collide – shouldn't be underestimated. With festive shopping on the horizon, here, in alphabetical order, is a sample of the MP3 players available for under £50 that will surely add volume to any Christmas stocking.

Apple's iPod Shuffle, the archetype for any clip-on player, has seen some improvements this year. The decision to move the controls off the earphone cable and back to the body itself is a welcome change that means you can use nicer cans. The sound itself is fantastic and plenty loud enough.

The Shuffle is small, elegant but very basic. Its aluminium case has an executive slickness to it and there's no doubt that Apple’s little music box sets the bar for minimalist audio players. Aside from the exclusivity of iTunes, the main problem I have is value for money. As this round-up highlights, you get a lot more for your quids elsewhere. While having additional features like a display, radio and voice recorder may impact slightly on battery life, the Shuffle is by no means a particularly long-distance runner itself.

Still, Apple has been doing this for a while now and even though the Shuffle is by no means my top choice, it remains a safe option. It is perfect for joggers and offers format support to suit most users, with plug-ins available for iTunes able to convert other formats.

I wasn’t too impressed by the 18 Vision, which feels like a cheaper version of the Creative Zen Style. The body is too lightweight and only saved by nice-to-stroke rubbery case. The sound is generally poor and feels like it’s missing something, perhaps because the bass lacks clarity.

The 18 Vision offers quite a range of features, including video, but movie playback is very pixellated on its 1.8in, 160 x 128 screen, and with the 18 Vision’s pitiful battery life, viewing can be shortlived. The voice recorder picks up a lot of background noise and the headphone socket is to the side, which unnecessarily makes the 18 Vision an awkward pocket fit.

While volume does go incredibly loud, the disappointing sound quality literally hurt my ears at such levels, especially with the supplied headphones. Alas, the 18 vision tries to do too much, which is all very well as long as you get the fundamentals right, which it doesn't. 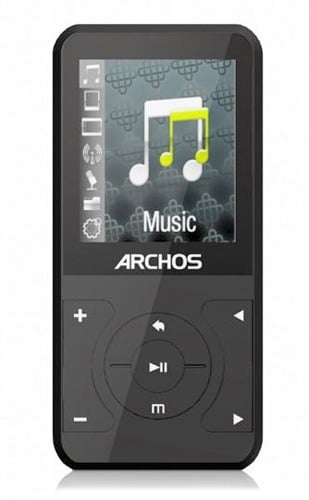