Mention robots and most people envisage the future, but some have been around longer than us. George the Robot is one such android and has found a new home in the National Museum of Computing after 60 years of hibernation in a galaxy far, far away his maker's shed.

George is the creation of Tony Sale, a former RAF officer and leader of the Colossus computer rebuild team. Sale evolved Meccano designs throughout his teens and, aged 19, rebuilt the robot for the fifth time using scrap metal from the wreckage of a bomber plane. George's height was raised to six foot and light sensitive cells were added to his eyes enabling him to home in on illuminated beer bottles. 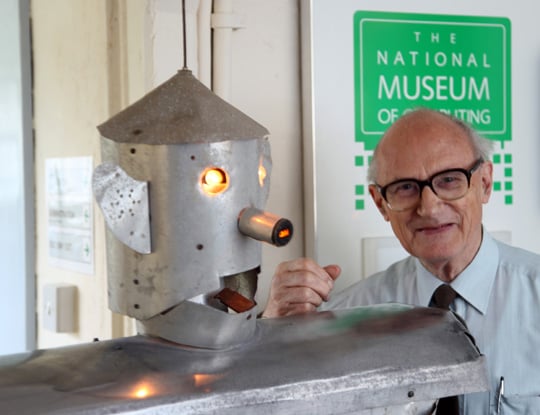 Powered by two motorcycle batteries, George could also walk, turn his head, move an arm and sit down. He took three weeks to construct and raised several eyebrows at the time including Pathé News, who broadcast this video.

Unfortunately, George received limited publicity and as computers weren't good enough to improve him further, he was left to gather dust in Sale's garage. Until recently, when the Pathé footage was picked up by Aardman Animations, producer of Wallace and Gromit, which included George's story in its latest TV series World of Invention.

George has since taken residence in The National Museum of Computing at Bletchley Park and can be admired by more than spiders, moths and other shed-life.

After a drop of oil he still functions, but can no longer sit down or locate beer. Sorry, chaps.

Of course, things have come a long way since then, peep this recent ITN video of a robotic Japanese nurse. Ooh, Matron! ®