How I invented Desktop Publishing

Well, OK. Me, and a thousand others

Today's Desktop Publishing systems like the Macintosh with PostScript are taken for granted, but it wasn't so long ago that these technologies were impossible.

Early "homebrew" computer hackers recognized the demand for computer publishing and paved the way for the professional systems we use today. Some of those inventions were just done for the sheer fun of a cool application, without thought to any commercial use. I was one of those hackers, and I may have invented DTP - and given it away for free - without realizing what I had done.

Before DTP, typesetting was terribly laborious. You would type your text on a typewriter with written "type specs." The typesetter would encode your specifications of typeface, size, and the width of the text column into SGML, and punch that into paper tape. The tape was fed into an optical typesetter that wrote the type on photo paper. That phototype page may or may not be what you wanted, it might need revisions, which could take another whole day. I recall only rarely seeing type being right the first time.

In 1980, I worked at a tiny computer store in Dubuque, Iowa. Some of my clients were textbook publishers with intensive typesetting demands. They wanted a way to ditch their Teletype ASR-33 punch tape machines. I converted them to CP/M machines with Wordstar, feeding the stored markup via serial port to phototypesetters. They thought this was revolutionary; they loved the improvement. 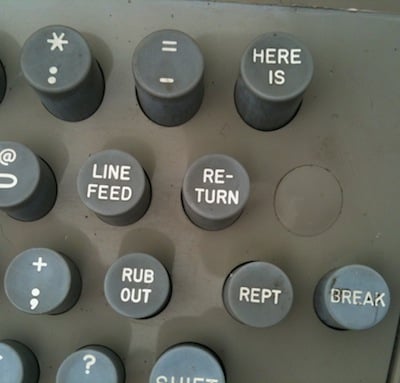 But I didn't love it. Wordstar nagged at me with its difficult formatting. Professional typesetters never used its formatting, merely used it as a text editor, storing their text and markup on disk instead of paper tape. For word processing, it was almost impossible to do conventional typesetting tricks like printing a page with text in two columns. What you saw was not even close to what you got.

I figured I could do better. In our computer store, we always had a well-equipped Apple II demo workstation. My favorite toy was the IDS Paper Tiger dot matrix printer. It was expensive, at about $1500, and noisy, but it could print in full color… all six colors that the Apple II high resolution graphics system could display.

But nothing excited me like the Apple Graphics Tablet. The software was produced by rock music producer Todd Rundgren, for use in his music video studio, and licensed to Apple.

In Utopia, you could draw with the stylus, or type characters right on the screen, and then print to the Paper Tiger. The graphics were crude but colorful, and just barely good enough. The software was designed more for engineers and draftsmen, but since it was created by video artists, it was very flexible.

One day I had an inspiration. We sold Beagle Brothers screen fonts. They were known as "BaggieWare" since they came on floppy disks in cheap plastic bags. The Graphics Tablet software could load the fonts and type them on screen.

This was the final element, Desktop Publishing was born.

Next page: The demo
Page: