The beauty and the boast

Review I took a look at the 11.6in MacBook Air for Reg Hardware almost a day after the new line-up of skinny Macs was announced. I've now had a chance to use one in earnest - and benchmark it - to see if my initial thoughts are born out by longer term usage. 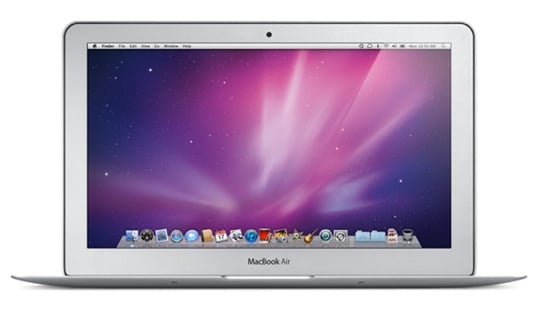 Apple's MacBook Air 11.6in: smaller and lighter than a netbook, but much more powerful

From both performance and portability perspectives, the 11.6in Air turned out to be better than I'd hoped. I had the bottom-of-the-range 1.4GHz Core 2 Duo SU9400, 2GB 1066MHz DDR 3 memory, 64GB SSD model to play with. The CPU is clearly no Core i - it may be a dual-core chip, but it lacks HypeThreading - yet it can lick any Atom processor you care to name, including the new 1.5GHz two-core, four-thread N550.

The Air, then, is no mere netbook.

And yet it's a darn sight more portable than one. The component that most affects the Air's size is its keyboard - full-size and a joy to use, as is the huge trackpad that puts all those piddly netbook ones to shame. The keyboard is wider than the 1366 x 768 glossy display, which makes the Air in turn larger than most notebooks. It's a good 35mm wider than the 10.1in Asus Eee PC 1015PEM I have on the bench next to it, and slightly deeper.

But, oh, how much thinner and - crucially - lighter it is. The Air's footprint isn't going to trouble anyone, but what might is its thickness and weight, both of which matter if you're carrying a computer around in your hand or under your arm.

I don't think I've ever had a computer that's as comfortable to close and carry as this one. It's 15mm at it's thickest point - the back end - and it's just so easy to hold as you would a folder or a book. Its 1.1kg isn't taxing it all.

The Eee PC, by contrast, is 35mm - more than twice as thick - and that, like the figure I've quoted for the Air, excludes the feet. It feels positively bloated by comparison. It's only 20 per cent heavier, but you notice the extra.

Next page: Compromised for size
Page: