How to... print wirelessly from your iDevice

Review Apple's decision to yank support for its AirPrint technology from Mac OS X 10.6.5 has the noses of no few iDevice owners out of joint.

With the arrival yesterday of iOS 4.2 and the wireless printing tech it brings to iPhones, iPads and iPod Touches, the absence of AirPrint on Macs prevents owners of these gadgets printing, unless they happen to own one of the few - HP only, so far - printers that are inherently AirPrint compatible. 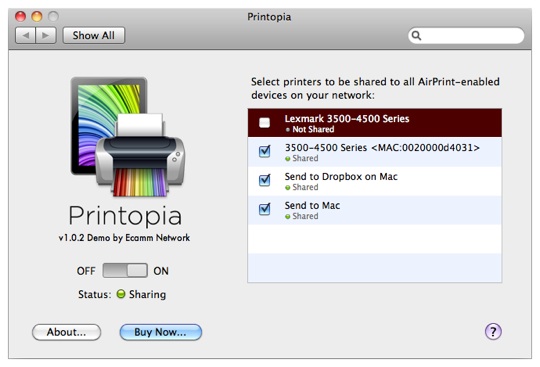 Enter Printopia from Ecamm Network and FingerPrint from Collobos Software, two utilities designed to bridge OS X and AirPrint. And if you simply want to transfer images to your computer, you can do that too, beaming over the iDevice print job as a PDF. Likewise you can ping PDFs to your Dropbox.

In fact, from a functionality perspective, FingerPrint and Printopia are identical. FingerPrint has one extra 'virtual printer' option: you can send jobs to iPhoto.

Both utilities require your printer - whether it's directly connected or networked - to be shared. At which point, it's listed by the utility itself, and is available to select in any iOS app that supports AirPrint - Apple's Pages, for example, or iOS' Safari, Mail and Photos. 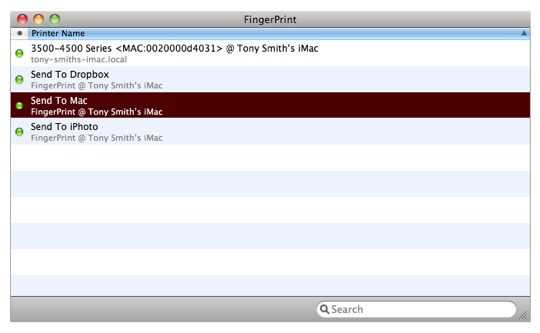 Sharing printers this way limits the apps to local networks, but if you need to send print jobs home when you're out and about and connected by 3G or a Wi-Fi hotspot, there are various ways to do so. I use a Mac OS X Automator workflow to watch a folder in my Dropbox, for example, and print out whatever gets placed there, and there are similar script-based approaches for Linux and Windows.