SpaceX, the upstart startup rocket company bankrolled by famous PayPal nerdwealth hecamillionaire Elon Musk, has received the first ever commercial licence permitting the re-entry of spacecraft into Earth's atmosphere from orbit. The chit will permit the firm to carry out an imminent test of its new "Dragon" capsule. 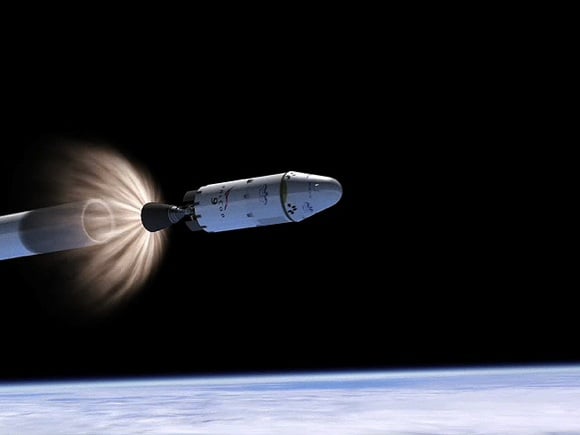 The feds say it's OK to do this now.

News of the licence award came courtesy of US government space agency NASA, though it is in fact the Federal Aviation Administration (FAA) which licenses commercial spaceflight. However SpaceX and the Dragon are of considerable potential importance to NASA in coming years.

With the Shuttle fleet about to retire and the planned "Constellation" successor rockets deep-sixed by Congress and the Obama administration due to lack of money, a manned Dragon may in coming years be one of very few alternatives to Russian Soyuz ships for getting US astronauts into space. Furthermore, the initial unmanned Dragon is planned to partially replace the shuttle in delivering supplies to the International Space Station.

Certainly it's clear that SpaceX's progress is being watched with interest from the very highest levels at NASA.

"Congratulations to the SpaceX team for receiving the Federal Aviation Administration's first-ever commercial licence to reenter a spacecraft from Earth orbit," said NASA chief Charlie Bolden in a statement yesterday. "With this licence in hand, SpaceX can proceed with its launch of the Dragon capsule. The flight of Dragon will be an important step toward commercial cargo delivery to the International Space Station. NASA wishes SpaceX every success with the launch."

SpaceX has a contract for commercial cargo delivery to the ISS, and hopes to win so-called "commercial crew" revenue by carrying astronauts as well.

It's also a fairly open secret that Musk and SpaceX harbour grander ambitions still. In 2015 the USA will choose a new, massive heavy lifter rocket to replace the long-lost Saturn V and the scrubbed Ares V: SpaceX has made it clear that it thinks it could build this mighty launcher, required for the loosely-planned US manned "deep space" missions beyond the Moon - and do so for a lot less money than it took to make the Saturn (and would have taken to make the Ares).

Regardless of what Bolden may say and feel about the comparatively small-time Falcon 9/Dragon combo, it's entirely clear that many employees at NASA and its longer-established contractors will not be wishing Musk and SpaceX every success in trying for the heavy lifter project. Musk himself has made it all too plain that he considers both NASA and the established rocket biz to be massively over-staffed, inefficient and wedded to expensive manpower-intensive technologies such as liquid hydrogen-fuelled engines.

If Musk really can deliver not just a working Dragon but a much cheaper kerosene-fuelled Falcon X Heavy or Falcon XX big lifter, a lot of people at NASA and the existing rocket majors will be out of work. But that battle is yet to be fought: for now all is smiles.

"I congratulate SpaceX on this landmark achievement and wish them the best with their launch of the Dragon capsule," said NASA honcho Doug Cooke yesterday, seconding his boss.

SpaceX's Falcon 9 has already made a successful test flight to orbit. The next launch by the company will be the new rocket's first flight with the Dragon capsule, which will subsequently re-enter to splash down in the Pacific. The Dragon is controlled during descent using "Draco" rockets and SpaceX say it should be capable of landing within a small distance - say a few hundred metres - of a designated point. The company hopes to bring it down on land once initial flights have proved the system.

The inaugural Dragon mission is expected to lift-off from Cape Canaveral next month. ®