Review With a glossy upper and matt finish lower halves there's a two tone look to this receiver, the cheapest on test, but certainly not lacking in HDMI connectivity. There six inputs in total (five on the back, one on the front), and unusually it also has two HDMI outputs, so you can have both video and audio in a second zone – an option you’d normally expect only on a more expensive device.

The RX-V767 uses Yamaha’s own YPAO speaker optimisation system which slightly simpler but easier to set up than the Audyssey alternative used by Denon, Marantz and Onkyo. The unit carries the full range of HDMI 1.4 specifications, including audio return channel and standby pass-through, as well as being 3D-capable.

HD audio formats Dolby TrueHD and DTS-HD Master Audio are present but there’s no support for the Pro Logic IIx which most other new receivers in this range have – only a loss if you really need those extra height channels however.

The graphical UI is a cut above its rivals, with a neatly laid-out and easy to follow layout which lies on top of whatever you’re watching – definitely more enjoyable to use than the functional diagrams on display elsewhere. The remote is extremely busy though, with a bewildering array of similarly sized buttons, so it takes a little getting used to.

Sadly, there’s no USB digital connection for iPod/iPhone – for that you’ll need to buy Yamaha Universal Dock. Sound performance is top notch though, perhaps a little ‘warmer’ than, say, the Pioneer, but to these ears that’s a plus that rewards extended listening. ® 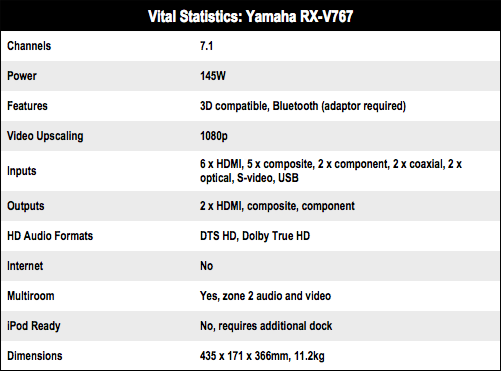