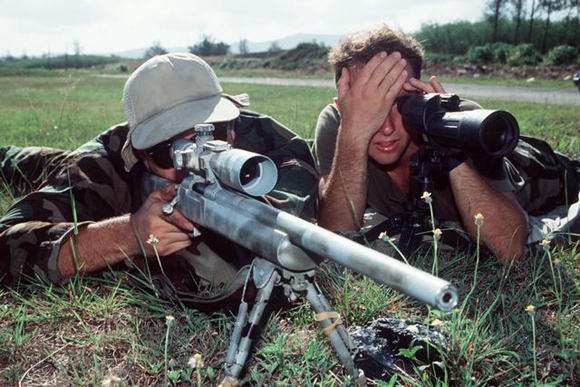 As everyone who has read the Discworld books knows, million-to-one shots actually hit nine times out of ten. Pentagon weaponeers saw no reason why this should not also become true for US military snipers, leading them to begin work on the "One Shot" miracle sniper-scope project.

One Shot works by using a laser to measure not just the exact range to the target (this is already common practice among snipers) but also to measure the wind forces along the bullet's line of flight. Wind is perhaps the marksman's greatest bugbear in long-range shooting, so much so that snipers aren't expected to achieve a first-shot kill any further off than 600m in normal circumstances3.

The One Shot instrument, which will replace the telescope used by the sniper team's spotter, will measure wind, range, inclination, air pressure and humidity. Linked to the scope on the sniper rifle, it will continually generate artificial crosshairs indicating where the bullet will actually strike: it will also indicate the likelihood of a wind shift during the projectile's flight time, allowing the shooter to pick the best moment to fire. All the sniper has to do is move the crosshairs onto target, wait for the circle of uncertainty to stabilise, and shoot.

According to spec, the One Shot system isn't quite as good as the Pratchett effect: it will deliver first-shot kills out to 1500m only six times out of ten rather than nine. Even so, this is highly impressive stuff - and again, it exists and is going into service now. Brassboard systems have already been tested, and a contract for "fully operational and field hardened systems" was inked last month.

That's not all, either, in the field of mad future sniper weaponry. The One Shot system is designed to make the lighter-calibre sniper weapons - rifles firing 7.62mm NATO, .300 Winchester Magnum or .338 Lapua Magnum - hugely more accurate: but once the bullet is flying there will be nothing more to be done. If the target moves away during its flight (which could take seconds at long ranges) or the wind shift unpredictably, it will still miss.

But this is in hand. Bigger, fatter .50-calibre bullets are big enough that it might be possible to fit them with guidance fins and a seeker sensor - probably not a sophisticated one able to home in, say, on a person's body heat: but one which could home on a laser dot in smartbomb style should be possible.

Like a smartbomb, the proposed EXACTO .50-cal smartslug would have no propulsion of its own. It would still fly ballistically through the air like a regular bullet, but it could adjust its path so as to hit on top of the sniper's laser dot pretty much regardless of wind, range or even a fair amount of movement by the target.

A .50-cal bullet fired on a high arc can easily fly 6 or 7 km, so if EXACTO (EXtreme ACcuracy Tasked Ordnance) ammunition can be made, snipers would be able to strike at this kind of range and hit moving targets, too. This last would be handy as .50 rounds are commonly used for "anti-materiel" tasks such as knocking out vehicle engines - they're generally seen as overkill for sniping at individual humans4.

Progress? Well the EXACTO project isn't as far along as One Shot. However a "successful proof of concept" via "high fidelity hardware-in-the-loop (HITL) simulation" has been carried out, and a Phase II concept which will see a working system built has been issued.