50+ crowd are wolfing down tablets: Silver foxes are even migrating to the Twitters

@gramps We'll see you at #sundaylunch

As outlined by the recent surveys by UK comms watchdog Ofcom (PDF) and tech services company Kana, not only are older people using tablets, they are also using the internet more.

It’s a dramatic rise, with Ofcom showing the number of people over 65 going online as 42 per cent compared with the previous year’s 33 per cent.

The Kana figures show those aged over 65 are actually better connected than those aged 55 to 64. The older group will check for emails around every hour while the pre-retirement group will only look every four hours. Older people are also apparently more assiduous about checking voicemail and Twitter.

Hang on... Twitter? Do the 65+ group really use Twitter? Only 13 per cent of the Kana group use Twitter but part of the reason for even this high figure is the research methodology. While Ofcom used in-house interviews, Kana did an online survey.

So automatically selected the much more techie segment. Of the 310 people aged 65+ in this study, only 5 per cent said they didn't have a mobile (versus 2 per cent for 55-64).

Previous research by Forrester has shown a US figure of 50 per cent for mobile penetration among the over-65s. This was a telephone survey and hence may be subject to double-counting (for example, many couples will share a phone and if you ask either of them if they have a phone they will say they do). 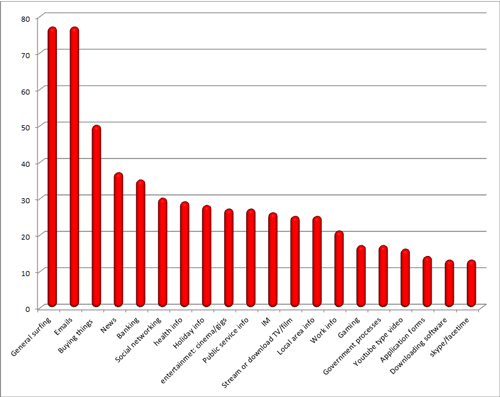 The top 20 things people over 65 go online for accoring to the Ofcom figures.

The Ofcom methodology is more robust, and finds that six in 10 adults has a smartphone with that dropping to two in 10 for users between 65 and 75 and only one in 20 aged over 75.

This may change as there is an increasing range of “Grandroid” phones from Fujitsu, Doro and Emporia which are all easy to use smartphones with emergency buttons and docking cradles. The experience of NTT DoCoMo in Japan is that by introducing its Raku Raku scheme for seniors it has taught older people, starting with first basic, and then feature phones to embrace smartphones.

The Ofcom research is generally at odds with the Kana figures, showing that those aged 55 to 64 use the web more than those aged over 65.

The growth is surprising as neither Android nor iOS has done a particularly good job of targeting the grey market and social networks aimed at the field have been slow to take off.

Over-50s lifestyle and insurance brand Saga has also struggled in its attempts to create social networks for the elderly – with both Saga circles and Sagazone being shuttered.

There is also an issue with using capacitive displays, as our fingers often become less conductive as we age.

Research by the University of Cambridge has found that motivation is the key to getting older people to use technology. Often this might be something as specific as using Skype to video-call grandchildren, and the presence of banking and using the internet for health and government services shown in the Ofcom figures also bear this out.

With more emphasis on using technology to allow people to live in their own homes for longer, the findings of both Kana and Ofcom show that it could become a key way of managing the cost of caring for our aging population. ®