When Jobs introduced the iMac, he enthused to his Flint Center audience, "The back of this thing looks better than the front of the other guys'." Indeed, Apple's focus on industrial design was one of the revolutions ushered in by the iMac.

Remember, if you're old enough, the beige boxes of yesteryear. For all intents and purposes, they're gone — even the stodgy fogies at box-churners such as Dell have had to put ID designers on their staffs. 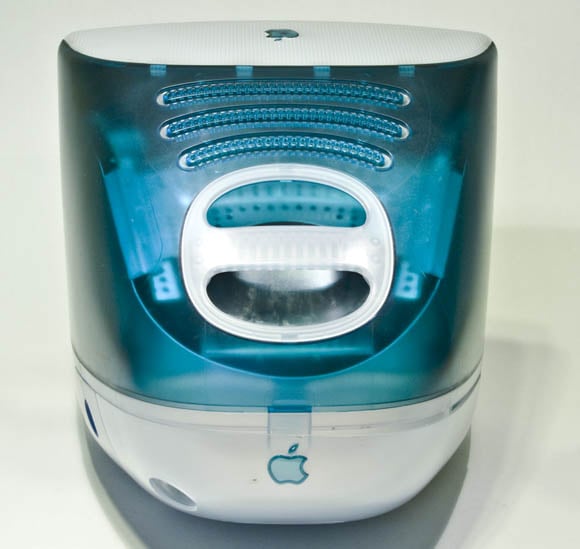 The first PC with a cute butt (click to enlarge)

Design was on Jobs' mind when he rolled out the iMac — he must have used the word "cool" at least a dozen times. "It looks like it's from another planet," he cooed. "And a good planet — a planet with better designers."

Like the original Macintosh 128k — and lesser lights such as the Color Classic and LC 575, the iMac was an all-in one. Like that original Mac, it included a handle, fastened snugly to its plastic case with four healthy-sized screws. At 40 pounds (18.1kg), however, the iMac was far less luggable than the 1984 original, which weighed in at a mere 16.5 pounds (7.5kg). 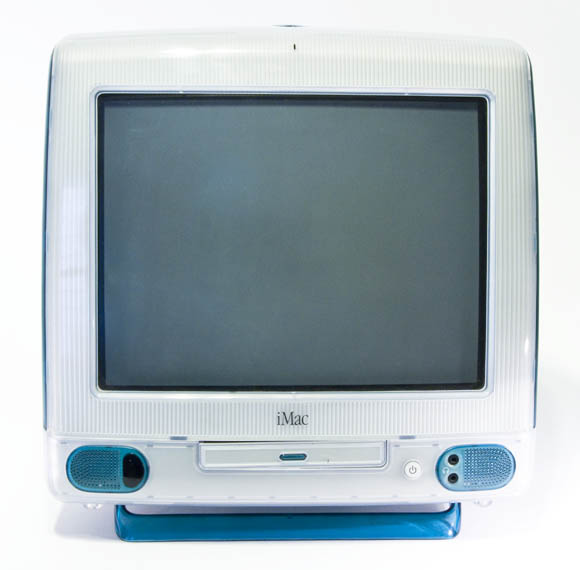 The front of the iMac was home to a pair of SRS-enhanced stereo speakers. The grille for the speaker on the right side — the iMac's right, that is, not yours — included a deep-red window for the iMac's infrared connectivity. The port used the IrDA protocol, which could handle data at up to 4Mbps and supported both AppleTalk and TCP/IP.

Use of the infrared port never quite caught on, however, even though Jobs at his rollout touted its ability to stream digital photos wirelessly from an IrDA-equipped camera — digital-camera images were smaller in those days...

The infrared capability disappeared from the iMac when the Bondi Blue's follow-ons — Blueberry, Strawberry, Lime, Tangerine, and Grape — debuted in January 1999. The Bondi's tray-loading CD-ROM drive survived that next generation, but was replaced by a slot-loading CD-ROM or DVD-ROM drive in October 1999's product-line refresh.

And in one of its most controversial design decisions — said to have been championed by Rubinstein — the original iMac (and its follow-ons) had no floppy drive. That decision worked out quite well, however, despite claims by many at the time that the lack of a floppy was going to be the iMac's fatal flaw.

The right-side speaker grille's dual headphone jacks were a nod to the iMac's education-market hopes: a teacher and a student — or two students — could simultaneously listen to what was then called "multimedia content". Also, the dual jacks may also have been part of the iMac's family-friendly focus, which Jobs said was defined by the "i" in its name, which stood for "internet, individual, instruct, inform, and inspire."