User-serviceable — for some users, at least

The Bondi Blue iMac was designed to be relatively easy to open to upgrade both system and video memory. Doing so, however, wasn't what we'd now call a simple matter — it involved setting the iMac face-down on a pad or fluffy towel, removing its bottom, popping off a few cables, and sliding its guts out on a tray. 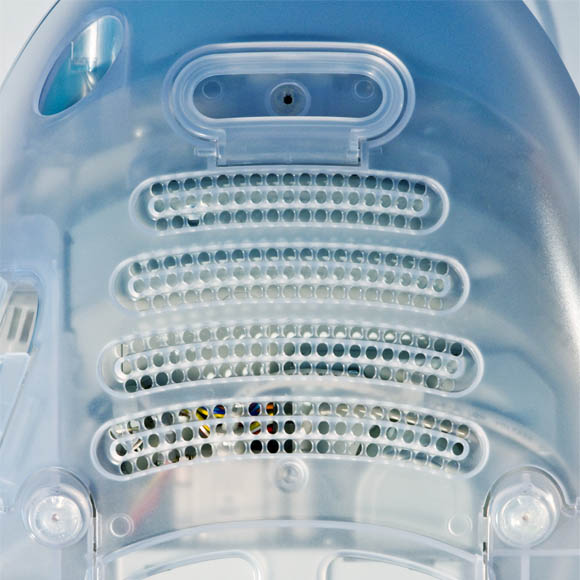 No, this isn't a scene from Jaws, it's the underside of the iMac (click to enlarge)

Popping off the bottom of the Bondi Blue is a simple matter of removing one screw, then grabbing hold of the handle and pulling off the cover. It's after you free that cover that things get a bit wonky. 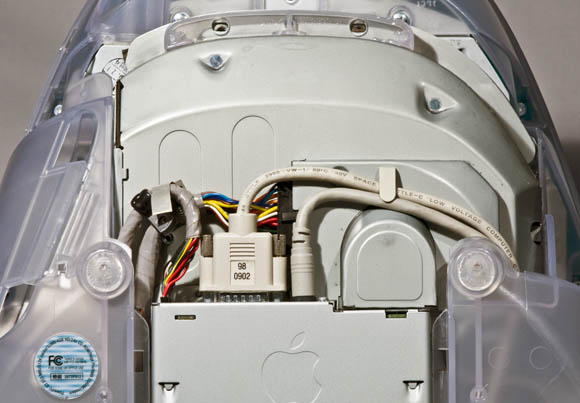 After you've disconnected the cables, you grab the system tray by its top plastic handle, lift — and wiggle and coax a bit — and it slides up and out. 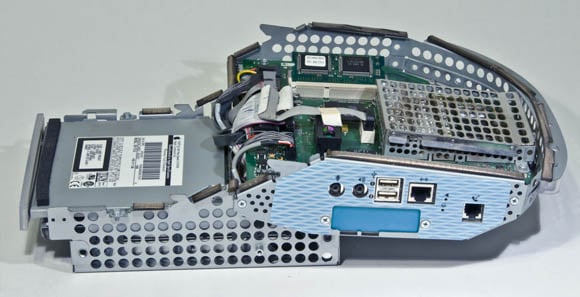 The iMac without its CRT or plastic shell (click to enlarge)

Once out of the iMac, the system tray reveals itself to consist of two main areas. in its boxy flat front live the CD-ROM drive and the hard drive, with the former siting on top of the latter. In the tilted rear section lives the logic board and all its computing goodness

One thing you can't immediately see when looking at the system tray is the lack of hefty boot ROMs. The iMac was the first Mac that used what was called the New World ROM — meaning that after the machine booted from a 1MB Open Firmware ROM, the 3MB Mac Toolbox image was loaded into RAM from a file on the hard drive. Previous Macs had the Toolbox and boot routines in a hardware ROM. 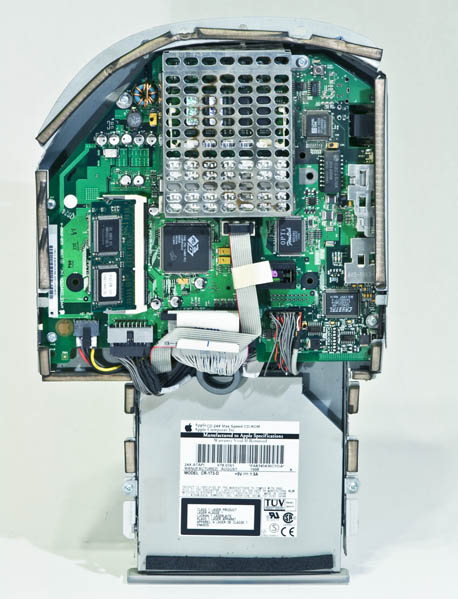 When the system tray is propped up on its CR-ROM foot, it's easy to see the cage in which lives the CPU daughtercard and SO-DIMM RAM slots. A simple clip holds the cage's lid in place; removing it allows you to also remove the CPU's heat sink — which sits right on the chip with no thermal paste — and expose the little guy himself. Or herself. Whatever.

Next page: In the chips
Page:
Corrections Send us news
132 Comments