After I freed the system tray from within my supposedly original Bondi Blue iMac and began looking around, I noticed that there was a two-sided SO-DIMM in the slot labeled SGRAM SO-DIMM Only. The original Bondi Blue had only 2MB of video SGRAM soldered onto the logic board, and a SO-DIMM slot in case you wanted to upgrade to 4MB or 6MB.

Being a "glass half-full", optimistic, Polyannaish kinda guy, I at first thought: "How nice — the previous owner must have upgraded the video RAM in this original iMac from its stock 2MB to its max 6MB." 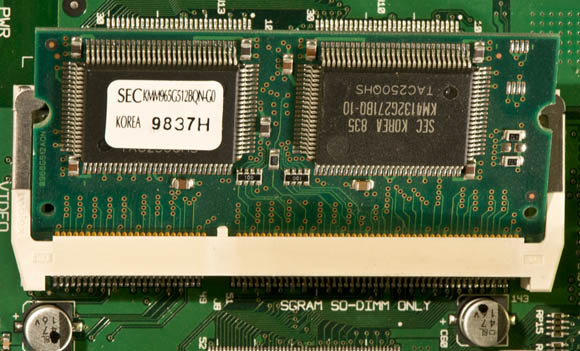 With a two-sided SGRAM SO-DIMM, the Bondi can be equipped with 6MB of video memory (click to enlarge)

But then I got out my magnifying glass and read the ID info on the graphics chip sitting next to the SGRAM slot — and discovered that what I had thought for years was an original Rev. A iMac was instead a Rev. B.

The Rev. A's display was powered by an ATI Rage IIc with a core clockspeed of 60MHz and a memory bandwith of 480MBs. My now-unmasked Rev B., on the other hand, has an ATI Rage Pro Turbo PCI chip, which has a 75MHz core and talks to SGRAM at 800MBs. 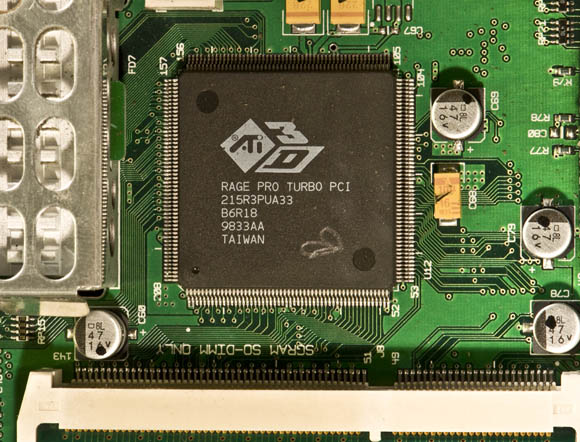 Yeah, the Rage Pro is a better performer than the Rage IIc, but I miss the cachet of owning the original.

At least the CPUs in the Rev. A and Rev. B are identical: a 233MHz Motorola PowerPC 750, aka the G3, running on a 66MHz system bus. It may be hard to stretch your memory back to 1998, but a 233MHz G3 was a respectable part at that time. Jobs, however, when introducing the iMac, went well beyond respectable: "This thing screams," he said. 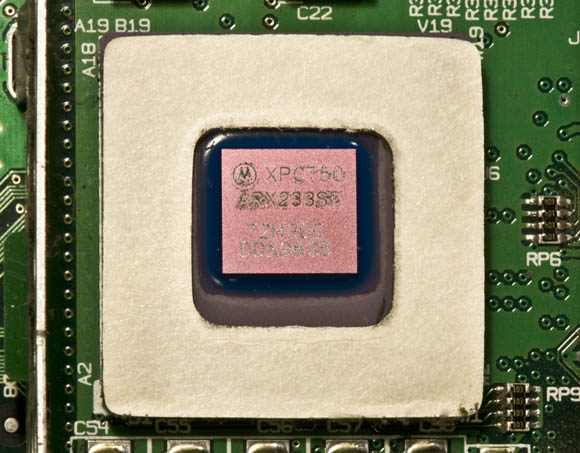 The G3 — so small and vulnerable-looking, eh? (click to enlarge)

The Bondi Blue shipped with 32MB of RAM in one SO-DIMM — no RAM was soldered onto the logic board. Again, to quote Jobs from his intro spiel: "Let's go ahead and put a lot of memory into this thing: 32 megabytes standard — it's expandable to 128." Actually, it was expandable to 256MB, but not from Apple. 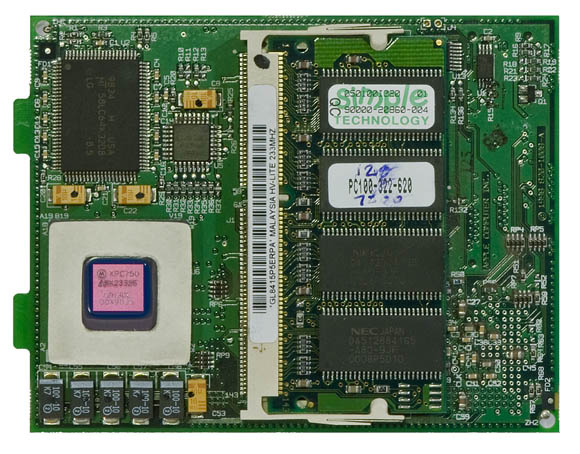 The top of the Bondi Blue iMac's CPU daughtercard, with the G3 in the lower left (click to enlarge) 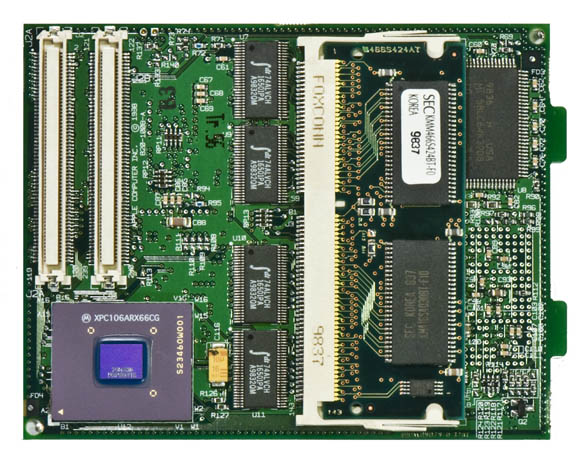 The bottom of the daughtercard, with the bridge/memory controller chip in the lower left (click to enlarge)

One distinct advantage of the daughtercard setup was that third parties could and did offer CPU upgrades for the Bondi Blue and the next two iMac revisions, which were also daughtercarded.

Sonnet Technologies, for example, offered the 600MHz PowerPC G3 Sonnet Harmoni G3, which also added a FireWire 400 port that poked through that aforementioned screwed-in plate behind the Bondi's port door.

Which brings us to...

Next page: The mysterious mezzanine
Page: