For the man who’d drawn up the Symbian business plan, the goal was simple.

“We would own the UI. If you own the user experience, you own the developers, and you find a lot of valuable stuff is migrating to you,” says Christensen.

But if the former Psion staff, familiar with driving radical and popular designs to market, thought that Symbian was just Psion Software with a bigger toy box, they soon realised they were at a very different kind of company.

Meetings dragged on without conclusion. Decisions were delayed. Ericsson, under subtle influence from Nokia, also began to cool on the idea of accepting designs from Symbian. And all for products which didn’t exist.

“Our ability to dictate the UIs was certainly removed very early on in the negotiations,” East recalls.

“It became clear to us that Nokia had woken up to the fact that if these guys own the UI and the developer model - then that's where the value is going to migrate to.”

Despite assembling a design team to create great UIs, only one Pearl remained.

One of the strangest beliefs circulating in the industry 10 years ago was that Bill Gates refused to allow Microsoft employees to mention the name Symbian. Your reporter had a hand in creating this myth.

In September 2000, one of the architects of Symbian Juha Christensen made his first public appearance in his new job as Microsoft's VP of Sales for mobile products. He had been on gardening leave since leaving Symbian in March. The transcriber couldn't glean the name of his former employer, so whenever Symbian was mentioned, the transcription inserted "(inaudible)".

Never wanting to let a misfortune leave without fulfilling its comic potential, we left open the possibility that this was censorship from on high. On several occasions subsequently, much to the (understandable) annoyance of Symbian comms staff, we decided to play along. 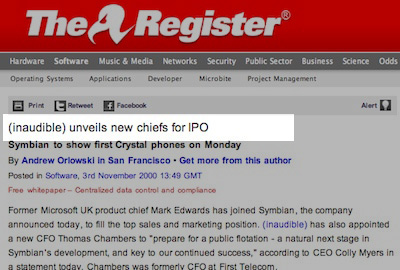 "I looked into this," he tells us. "It was just a transcription error. We grow up in Europe on Monty Python, but one thing you learn about big American companies, is that the sense of humour is pretty non-existent"

“We thought it was wonderful - but none of the licensees wanted to buy it,” said one executive.

"Nokia was masterful at influencing people. Ericsson willingly went along, but they should have known better," says Christensen.

“They decided internally that was not going to happen. Without telling us. They started talking about migrating UIs from Symbian.”

Psion design veteran Nick Healey (as he vividly described in this 2007 interview) had already lost faith. There were too many compromises by committee. He left after eight months.

Nokia certainly wasn’t trying to capsize Symbian, veterans agree. Nokia was its strongest supporter, and had the religion about licensing – about creating a mass market. It is the strongest, only supporter today.

Another factor that’s easy to overlook today influenced the many Symbian stakeholders.

Like the music industry, the mobile industry veers as a pack between one business fashion and the next. But Nokia was alone in providing consistency.

Nokia was executing flawlessly. It had overtaken Ericsson as the number one digital mobile phone vendor in the year Symbian was born. Randall remembers seeing “Nokia hitting three year roadmaps to the day”. Nokia’s confidence about user interface design awed, and perhaps cowed, the other shareholders.

“It wasn’t explicitly killed, but it slowly extinguished over a period of time,” says Simon East.

The subtle shift wasn't apparent to everyone at Symbian. The company had developed a technical consultancy, and this was creating the products bu working closely with the customers. The UIs were being developed on the hoof. It became a vital revenue source for Symbian.

"It's the classic model of developing something really complicated, then selling support back to the customer," says one former executive.

But this meant the DFRDs were redundant. They were superseded by the works-in-progress.

Then came a bolt from the blue. Nokia had secretly developed its own user interface. It called it Series 60, and Pearl was redundant.

“They kept it secret from us until it was presented to us very late in the day, a fait accompli.”

“S60 flat out came in and killed Pearl. It was a threat to Nokia's plans and they didn't want competition. It was that simple. I was told this directly by a senior VP,” recalls an executive.

The long, long haul to ship a product

It took four years before Symbian appeared in a mass market smartphone, the Nokia 7650. Only two other models appeared during that lacuna, a monochrome device from Ericsson which didn't accept third party applications, and Nokia's third Communicator, the Linda project signed in January 1997.

Why did it take so long? Certainly the press played its part in raising expectations to fever pitch.

One reckless journalist described this, “the initial trickle of EPOC devices, led by Ericsson's R380 smartphone, is expected to soon become a flood, with more than 30 devices available in the next 12 to 18 months.” Six months later, Symbian still insisted a slew of products would be hitting the market, from early 2001 on.

A joint venture between Motorola and Psion, based on Quartz and codenamed Odin, was eagerly anticipated. Nokia had earmarked its first mass market Symbian phone to appear in Summer 2001 too. Ericsson has shown an impressive, pen based smartphone using Quartz, and even Sanyo had demonstrated a Quartz device. Yet just one Symbian smartphone would appear in the next 18 months – the Communicator. Nokia's "Calypso", featuring Nokia’s own UI, only reached market in August 2002. Competitors made much of Symbian's difficulties. Wasn't this what you'd expect, they pointed out, from a European-led design-by-committee approach?

Next page: So what really happened?
Page: