How to kill your computer

When the kernel panics once too often...

Many people simply ignore the rule "if it aint broke, don't fix it" and end up annihilating their computer through a burst of static electricity or dodgy DIY.

Back in 2002, El Reg ran a few pieces on the obscurer ways to kill a computer. Most of the links are dead, so we thought we'd have an updated look into this wacky world of tech sadism and inspire you to destroy your own PC, perhaps.

Don't forget that Vulture Central takes no responsibility for damage or loss of equipment, limbs, life or self-respect. Don't ask us for help if it all goes wrong - we will only laugh at you.

Here's a handful of methods.

Turn your computer into an art project

What's worse than finding a worm in your Apple? Finding out that its been smashed up in the name of art perhaps...

Destructive artist Michael Tompert has done exactly that for his gallery show that ran in San Francisco recently. Tompert buys Apple products and annihilates them with blowtorches, handguns, saws and sledgehammers, then captures the aftermath in stunning high-res images. 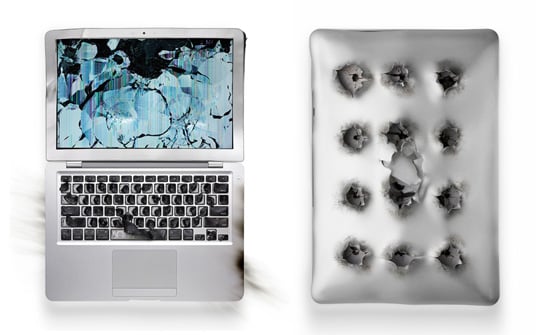 The idea came about after Tompert saw his kids fight over an iPod Touch. To show them it was just a silly gadget, he smashed one up in front of them, much to the despair of the entire household. It was then that Tompert saw the beauty in what he'd done and decided it could inspire consumers to think more about their relationship with these popular devices.

After enlisting the help of photographer friend Paul Fairchild, Tompert recreated product shots Apple uses in its adverts with an additional dollop of damage.

While shooting his way through an iPhone and leaving iPod Nanos on a railway line brought instant extinction, the "practically indestructible" iPad withstood sledgehammer blows and various other attacks. He eventually managed to make the tablet go boom after heating it with a soldering torch. 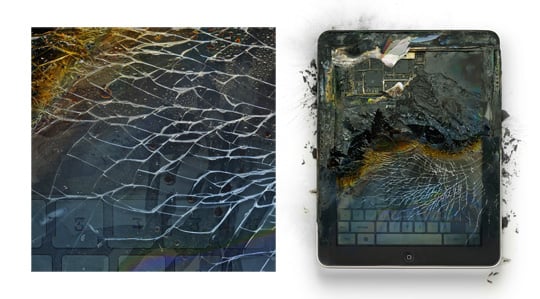 What happens when you melt my iPad? iScream

Ironically, Tompert is an ex-employee of Apple, but insists the shots are not meant to be disrespectful and has nothing but admiration for its products.

Tompert buys all his products new and has so far murdered iPhones, an iPad, iPod Nanos and MacBook Airs. Needless to say, his art has cost him quite a lot. An iPhone 4 was purchased on eBay and already had a cracked screen but still set him back $800. A few swings of the sledgehammer later though and Tompert had turned it into an art piece entitled "Must Have". Must have lost the plot.

Of course this isn't the only time computers have been shot in the name of art.

While Apple fans have gunned Windows machines for quite some time now, the weapon-obsessive PC assassins at killacomputer.com have literally been gunning computers for over eight years. Check out their site for flicks of desktops in despair and laptops levelled with lead. Only in America, eh?

Next page: Cook it
Page:
Corrections Send us news
64 Comments