Apple has been granted a patent for a projection system that can enable multiple viewers to simultaneously view 3D images without the need for those dorky 3D glasses.

Autostereoscopic is the standard term for the ability to present 3D content without the need for eyewear such as active shuttered or passive polarized glasses, as are used for most current 3D presentations.

As the patent states, "...most voyages into virtual reality are currently solitary and encumbered ones: users often wear helmets, special glasses, or other devices that present the 3D world only to each of them individually."

Understandably, this is less than ideal — "observers generally do not like to wear equipment over their eyes," the patent notes. 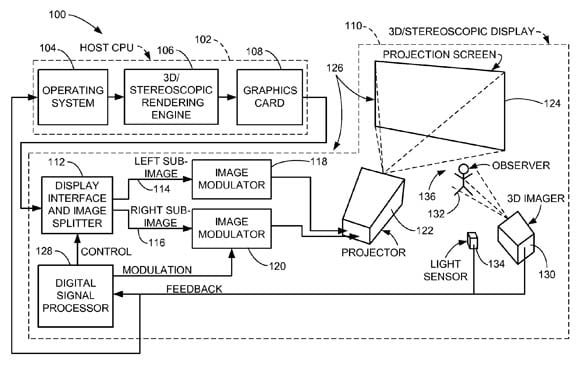 Apple's autostereoscopic scheme tracks where you are, and tailors its display to your position

Although many companies are involved in autostereoscopic research and development, Apple's patent confidently picks apart the limitations of three categories of those efforts:

Apple's solution, simply put, is to first track viewers' position and movement, and then use that information to guide the projection of pixels onto "a projection screen having a predetermined angularly-responsive reflective surface function."

In other words, each projected pixel would be beamed onto a textured, reflective screen in such a way as to reflect into the eyes of each viewer at angles that separate the image into left and right views, thus producing a 3D effect. 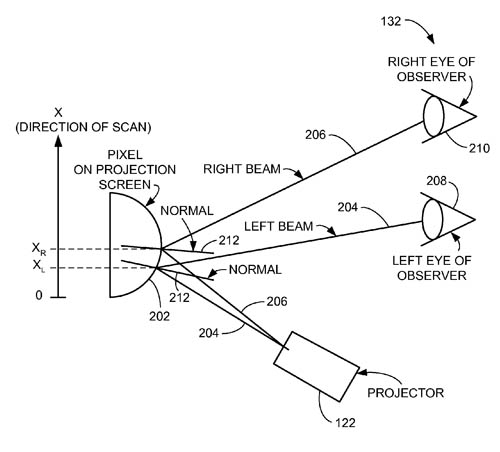 Each pixel is aimed at a curved surface, where it reflects onto the correct eyeball

As each viewer moves in relation to the screen, their individualized views would be captured by the tracking sensor, and that information would cause the projection angle to change for that viewer.

The patent also decribes methods for allowing viewers to virtually interact with the display by manipulating 3D projections, in addition to what it refers to as "holographic acceleration" — meaning that the displayed image can "move relative to the observer correspondingly faster than the observer's actual movement or displacement," with the level of acceleration determined by a "selected factor."

The proposed 3D projection system is certainly the stuff of digital gee-wizardry, but the patent assures us that it "valuably supports and services the historical trend of reducing costs, simplifying systems, and increasing performance." ®