Selling Apples to Japan: Complicated as a Nipponese typewriter

One day, a surprising market walked in the door

I'm an artist who's always been fascinated by computers - ever since junior high math club.

My first computer was a plastic toy cogwork Turing machine called the DigiComp 1. I ran a mailing list on punchcards for the school newspaper. I used a PLATO IV - a PC before the era of microprocessors, whose storage ran on compressed air; and I built a Sol, which I restored a couple of years ago. I even got kicked out of Art School for doing computer graphics.

By 1985 I was one of the most successful salesmen in the Computerland store in Los Angeles, the biggest in the United States, with huge corporate customers like Disney. I'd sold Apple computers for years, and I was always seeking new Mac markets. One day, a surprising market walked right in my front door.

A young Japanese tourist walked in the store and in halting, stammering English, asked to buy the largest Macintosh system he could put on his credit card. Then he handed me a Tokyo University credit card with a $10,000 limit. I loaded up his card, and the system was delivered to his hotel.

A week later, another tourist arrived with the same request. This fellow spoke better English, so I asked him what was going on. He said that Mac systems were more expensive in Japan than in the US, so he could finance his whole vacation by buying a Mac in the US and then selling it in Japan. This was an odd sort of grey market deal, but these customers came in with regularity, and it wasn't against Apple's grey market prohibition.

So I started to become very interested in the local Japanese market. It was the 80s and the "bubble economy" meant Japanese corporations had more money than they could spend. They bought everything from fleets of Boeing 747s and Los Angeles skyscrapers to full corporate-wide networks of Macintosh systems. I was puzzled why these bankers, brokers and exporters preferred Macs - they were number-crunchers, where the PC traditionally ruled.

One of my corporate clients explained the problem. Japanese typewriters were monstrously complex, the technology having barely improved since the 1940s. A Japanese typewriter is essentially a tray of 2000 pieces of metal type. The typist would locate the character in the tray, then a mechanism would lift the metal type and hammer it into the paper. The process was more like typesetting than typing, and required highly skilled typists.

Only the most important documents were typed, primarily documents for external customers. Most internal documents were handwritten and sent between departments by fax, since Email did not support Japanese text. 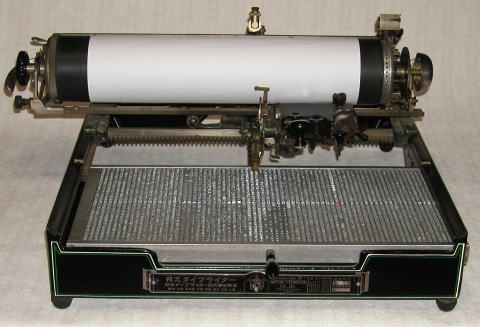 Pick a key... a Japanese typewriter

Then my client showed me an Apple product I had never seen before: the Laserwriter-J and KanjiTalk. Apple produced the first personal computer systems with full Japanese language capability in 1986. But these products were only for sale in Japan.

They bought Macs from me, but they had to buy the Laserwriter-J in Japan and fly it to Los Angeles, and pay an import duty for a product that was manufactured in California. Then they bought the KanjiTalk version of the Mac operating system, and made bootleg copies for every Mac I sold them. They begged me, why can't they buy these products from me, here in the US?