And even lower with Micro Server

Hewlett-Packard and IBM have been selling baby blade boxes suitable for office environments for the past couple of years, and now Fujitsu is chasing SMB shops with its own BX400 blade server chassis. The company is also chasing what it calls "very small businesses," hopefully not to be immortalized with the VSB abbreviation any time soon, with a new Micro Server.

The Primergy BX400 S1 blade server chassis is a 6U chassis that can be rack-mounted or tipped on its side and put on rollers to fit in an office environment. The chassis has room for eight half-height server or storage blades and has a midplane with three different fabrics.

Three different server blades can plug into the box. The Primergy BX920 S2 blade is a two-socket server that can use Intel's Xeon 5500 or 5600 processors and has nine DDR3 memory slots to support a maximum of 144 GB using 16 GB memory sticks. (One socket gets six slots, the other gets three.) The blade has room for two hot-plug drives (2.5-inch SAS), and includes a SAS RAID 1 disk controller on the mobo plus four Gigabit Ethernet ports that hook into the midplane. It also has two PCI-Express x8 mezzanine cards for peripheral expansion.

The Primergy BX922 S2 blade, also a two-socket box sporting Xeon 5500 or 5600 processors, has six memory slots per CPU socket for a maximum of 192 GB of main memory. That extra memory means getting rid of the hot-plug SAS drives and mounting SATA drives on the mobo inside the blade server's metal skin. All other features on this blade are essentially the same as on the BX922 S2. The final blade supported in the BX400 chassis is the BX924 S2, which is a two-socket Xeon machine that has 18 memory slots for 288 GB of maximum main memory and drops the network links down to two Gigabit Ethernet ports.

All three blades support Microsoft's Windows Server 2003 R2, and Windows Server 2008, and Windows Server 2008 R2 variants as well as Novell's SUSE Linux Enterprise Server and Red Hat Enterprise Linux. (Specific releases are not given, but it is likely to be SLES 10 and 11 and RHEL 4 and 5 at this point.) VMware's ESX Server 3.5 and 4.0 and Citrix Systems XenServer (probably 5.1 and 5.5, but the spec sheets do not say) are also supported. Fujitsu says that it will support "other Linux derivatives on demand." OK, how about Android? (I'm kidding.) 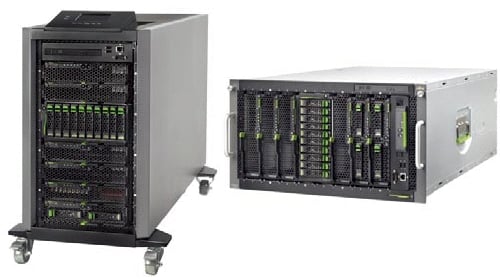 The BX400 S1 joins the BX600 S3 chassis (a 7U chassis that can hold ten Xeon or Opteron blades of an older vintage) and the BX900 "Dynamic Cube" chassis, which is 10U high and which supports up to 18 blades, including all the same ones that are used in the BX400 chassis as well as the BX960 S1 blade servers based on Intel's high-end Xeon 7500 processors. The BX960 S1 blade is a full-height, quad-socket server that has 32 memory slots and supports up to 512 GB of main memory against a maximum of 32 cores.

Next page: How to sell servers to people who don't know what they are</h3?
Page: