Brussels goes in to bat for beleaguered bees

But Brit boffin insists 'bees die all the time, chill'

The European Commission has launched a plan to restore bee health in response to widespread reports of increases in bee mortality. 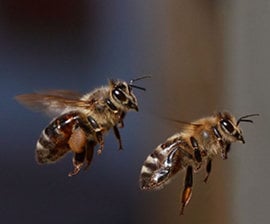 Is that a mite on your thorax, or are you just happy to see me?

But a British boffin has warned that much of the media coverage is hype and that bees, along with all other species, have suffered epidemics at some point or other in their history.

Francis Ratnieks, Professor of Apiculture at the University of Sussex, even referred to the impact of the Black Death in the 13th and 14th centuries, which wiped out up to half the human population of some towns and cities.

Ratnieks, told EUobserver: "The fact that honey-bee colonies die in large numbers is nothing strange...there's an awful lot of hype about bees..."

Bee deaths have been blamed on environmental problems, new diseases and even mobile phone masts.

Ratniek told the Register: "There is no evidence that mobile phones are a factor. There has been a steady decline in the number of hives in the UK and USA and this is likely to be due to the decreasing availability of flowers, which provide the nectar and pollen on which bees feed. Habitat loss is the greatest threat to wildlife including honey bees."

The Commission yesterday promised to establish an EU reference library for bee health at Sophia Antipolis, France, and a pilot surveillance program to work out the scale of bee death.

Bees are at risk from various bacterial, viral, parasitic and environmental problems and there are very limited veterinary products for treating the creatures.

It will also establish research projects to look at bee health, as well as projects investigating the decline of other domestic and wild pollinators.

There are 700, 000 beekeepers in Europe - most of them hobbyists, the Commission reckons.

Fears of widespread bee deaths began when reports of "colony collapse disorder" hit the US in 2007.

Such stories are almost always bolstered with the repetition of a dubious Einstein quote: "If the bees die, humans will have four years of life left". ®

OceanBase 4.0 is derived from tech behind Alipay and is MySQL compatible
Databases16 Aug 2022 | 4