Grey marketing is great - if you're the importer...

For we're absolutely outraged at the idea that anyone might try to bring in cheaper versions from other territories of products that we've spent a fortune marketing: but we're similarly delighted at being able to source goods with which we can screw over Fred down the road.

It doesn't really help us all that much that the law is entirely a mess in this area either. Take the case of Fei Lam just recently. He had a contact at Foxconn (wouldn't we all like one of those?), which actually makes the iPhone for Apple, and using his Chinese language skills was able to purchase the “white iPhone 4” kits that seem to be driving the fanbois wild. 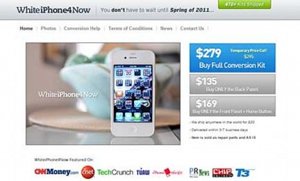 Cranking them out from his website, he garnered $130,000 in sales before he was monstered by Apple's lawyers. While US law is indeed different from what applies to us here in Europe, it's still not clear what, if any, laws he was breaking. But then trying to fight a legal case against a company the size of Apple is not known to be conducive to wealth creation either.

That sort of parallel or grey importing ought to be entirely legal over here: it's one of the cornerstones of the entire European Union project that there must be free movement of goods. There are a couple of restrictions (medical devices and drugs are still nationally approved in large part) but other than those very specific areas, anything that it is legal to sell in the EU can be sold anywhere in the EU.

But this then comes up hard against the desire (an entirely logical desire) of producers to segment their marketplace.

As any seller of anything at all knows, there are people out there who will happily pay more than others will for the same product. One of the great tricks of marketing is to identify those over-spenders and to extract their extra cash from them.

Staying with the iPhone, this means having a high price on issue day and dropping it a couple of hundred $ forthwith. To the hugely amusing screams of the early adopters: what did you think they were going to do when there were those gasping for the toy and then those who would only buy it if reasonably priced? Or the last Jaguars of the Ford times, which were essentially the T-Bird (for the US) or Mondeo (UK) in a prettier body shape? Or, my favourite, some Starbucks offer to shake the sugar into your iced tea for you. For 50 cents extra of course.

In short: it's all about market segmentation, and allowing the extraction of the greatest amount possible for one's product.

Our problem with the law in the distribution channel, is that there's a distinct conflict between these two desires: for free movement of goods and for producers to be able to segment the market. And producers do segment, not just by changing their offerings: they do so by having different price structures in different territories.