Space boffins studying the puzzling mystery of Iapetus, the walnut-shaped moon of Saturn, believe they may have discovered how the strange body's unique equatorial ridge was formed. The mighty ridge at some places stands 12 miles above the surface average – more than twice as high as Mount Everest's summit is above sea level. 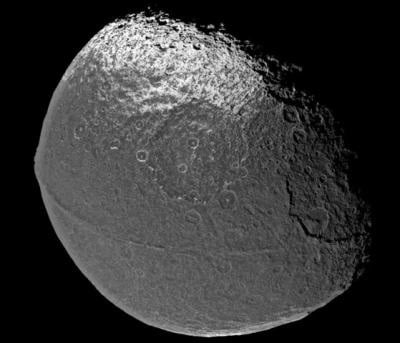 According to William McKinnon and Andrew Dombard, space-sciences profs in America, the curious ridge results from the long-ago breakup of a satellite body in orbit about Iapetus – a moon of a moon.

"Some people have proposed that the ridge might have been caused by a string of volcanic eruptions, or maybe it's a set of faults," says McKinnon. "But to align it all perfectly like that – there is just no similar example in the solar system to point to such a thing."

According to the calculations of the two profs and their colleagues, the ancient satellite-satellite would have gradually descended towards the surface of Iapetus as its orbit decayed. At a given point, tidal stress would finally have torn it apart, generating a ring of debris whose pieces would continue to descend until they crashed into the moon's equator, eventually creating the ridge we see today and so giving Iapetus its curious festive-nut-esque shape.

"When you have a debris ring around a body, the collisional interactions steal energy out of the orbit," explains Dombard. "And the lowest energy state that a body can be in is right over the rotational bulge of a planetary body – the equator. That's why the rings of Jupiter, Saturn, Uranus and Neptune are over the equator." 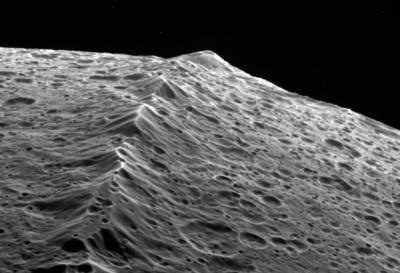 More than twice as tall as Mount Everest

"Imagine all of these particles coming down horizontally across the equatorial surface at about 400 meters per second, the speed of a rifle bullet, one after the other, like frozen baseballs," chips in McKinnon. "Particles would impact one by one, over and over again on the equatorial line. At first the debris would have made holes to form a groove that eventually filled up."

The scientists believe that the ripped-up-moon theory also neatly explains why it is only Iapetus that has such a ridge.

"Only Iapetus could have had the orbital space for the sub-satellite to then evolve and come down toward its surface and break up and supply the ridge," contends Dombard.

It seems that with moons – or moons of moons – in general they will recede from their parent body if they are further out than geosynchronous orbit, as in the case of our own Moon. But if they are inside this limit, as the ancient satellite of Iapetus was, they will gradually spiral inward, break up, and then scatter themselves on the surface.

Dombard will make a presentation on the team's preliminary findings on Wednesday at a convention in San Francisco. ®