Review Microsoft gives you the Windows Explorer. Apple gives you the Mac OS X Finder. And Google gives you, well, nothing. With Google's Chrome OS – the browser-based operating system that reached a handful of outside beta testers late last week – there's no ready means of browsing files on your own machine.

In their lightning reviews of Google's beta machine – the Cr-48 – many technorati testers decried this inability to browse local files. One called it a "major oversight," hunting for workarounds that give him at least a partial glimpse of his own hard drive, and many seem to believe Google will tack on some sort of file explorer before the first official machines ship next year. But this, shall we say, misses the mark. It's bit like arguing that Microsoft will soon open source its Windows code.

With Chrome OS, Google's fundamental aim is to shift all your files and applications onto the web. There's no local file explorer because Google wants you to forget about your local file system. Completely. 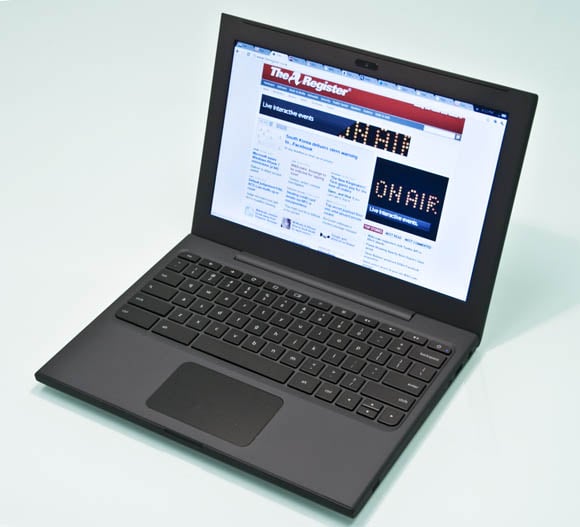 (All photos by Rik Myslewski)

The trouble is that many people aren't likely to forget their local file system – at least not any time soon. Those early reviewers miss the point entirely, but for that very reason, they're worth listening to. After years of using traditional desktops and laptops, you may find that an all-browser operating system takes some getting used to – particularly if it's still in beta. We've used our Cr-48 for several days now. We can confirm both that it's an all-browser operating system and that it's still in beta.

In other words, it's oh so very Google.

For better or for worse – and probably both – Chrome OS is the Google ethos taken to extremes. Google has long told us that everything will eventually happen on the web – from word processing to music listening to photo editing – and now, with the sort of cold rationality the company is famous for, it's building an OS that seeks to fulfill this prophesy.

What's more, Google is building this OS much as it builds web services: as an eternal work-in-progress. The company that kept Gmail "in beta" for five years is now offering beta notebooks to at least a portion of the general public, and if you ask whether a particular feature will arrive with the official OS next year, it tells you not to think in such terms. If a particular feature doesn't arrive on day one, Google says, it'll show up with update at some point in the undetermined future. Or words to that effect.

We should also point out that Cr-48 isn't a model number. It's one of those shameless geeky inside jokes Google is so fond of. The company is developing Chrome OS via the open source Chromium OS project, and Cr-48 is reference to chromium, the chemical element. It's a chromium isotope – a particularly unstable chromium isotope.

Google's beta netbook so unstable, there are cases where it launches a file explorer that lets you browser local files. Reviewers have seized on this as an indication that Chrome OS will indeed offers access to the local file system. But a company spokesperson tells us it's a bug.

This is the Cr-48. It's far from finished, and it's a far cry from your traditional notebook.