The all-black Cr-48 measures 0.9- by 11.8- by 8.6-inches and weighs about 3.6 pounds. It's not as svelte as Apple's Mac Book Air, but it's considerably more portable than, say, a MacBook Pro. The display measures 12.1-inches across the diagonal, and the keyboard is full sized, though Google has rejiggered a few keys. The traditional Caps Lock key is now a search key that opens up a new browser tab within the OS – what do you expect from the world's largest search engine? – and function keys have given way to various keys for adjusting volume and screen brightness and actually navigating the OS.

The machine's touchpad handles left-clicks, right-clicks, and scrolling as well as basic navigation. It's not nearly as adept as, well, an Apple touchpad, but after a little practice, we had few problems using it. The system also offers a USB port, a good old fashioned VGA port, an SD slot, a headphone jack, and a built-in camera. Google says it's still working to provide USB driver support, with cameras as the primary, er, focus. 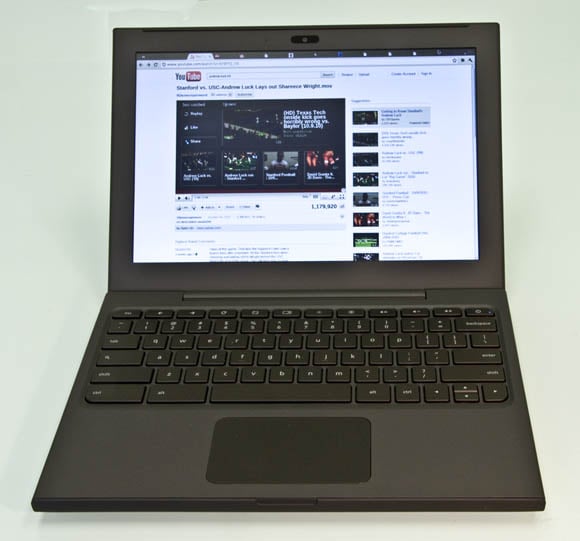 Presumably, the first official Chrome OS machines will include Google's revamped keyboard, but it's otherwise unclear how closely they'll resemble the Cr-48. According to Google, the first machines will ship from Acer and Samsung in "the middle of next year."