Chrome OS runs only on flash-based devices, not traditional spinning hard drives. As it moves the operating system to the browser, Google is also working to reduce boot and resume times. A year ago, the company boasted that its Chrome OS netbooks booted in less than 7 seconds. The Cr-48 isn't quite so quick. Our boot times are closer to 12 seconds, and though resumes are quite snappy, they aren't as "instant" as Google claims.

You log into the OS with, yes, the name and password from your existing Google account. The first time you log-in, the OS tries to snap your photo. This being Google, it's all a bit creepy. But the company seems to realize this. It gives the option of skipping the photo, and it tells us that when you use Chrome OS, Google collects no more data about your habits than it would if you were using the plain old Chrome browser on Windows or Mac.

Of course, the machine is designed to nudge the world into posting its scads of personal data on Google servers – something that free software king Richard Stallman and others aren't too happy about. When you log-in with your Google account, the OS automatically logs you into the company's myriad online services, from its search engine to Gmail to Google Docs. Sometime in the future, Google says, it'll switch to a standard means of authentication, such as OpenID. But at the moment, when you sign into your machine, you sign into Google and Google only.

On the flip-side, Google also offers a "guest" log-in mode, which opens up an anonymous browser session. Under guest mode, pages viewed won't appear in browser or search history, and it doesn't leave cookies, bookmarks, or downloaded files. According to Google, all trace of the session vanishes when you sign out. And naturally, the session is completely separate from standard mode sessions. You can't see a guest's data, and they can't see yours.

When you first log-in to the machine – in standard mode, via your Google account – the OS opens up a browser tab with a brief "Get Started" tutorial. This covers everything from the touchpad, the keyboard, and standby and startup to guest mode to the Chrome Web Store. Google opened Chrome Web Store on the same day it unveiled the Cr-48, offering an online marketplace for buying and selling extensions, themes, and web apps. At this point, the store is specific to Chrome OS and the Chrome browser, but Google has told us it's "open" to the idea of expanding – at least in some ways – to third-party browsers. 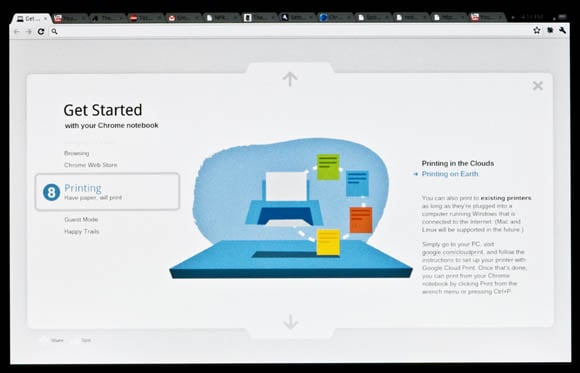 When you open a new tab in OS, you're given a kind of "home" screen that offers access to the Web Store, your bookmarks, and your "installed" web apps. With the Web Store, Google mimics app installation within the browser. Google divides these installable apps into two categories: hosted apps and packaged apps. A hosted app is a just website with some extra metadata that lets you easily return to the app again and again. A packaged apps is a web app that you can actually download, and these can use the Chrome Extension APIs.

When you "install" an app via the Web Store, a launch icon shows up on your tabbed home screen, and double-clicking the icon launches the app in the same tab. Some apps and extensions will also add an icon to the top of your browser window, and some use separate "panel" windows that appear in the top left or bottom right of the main window. 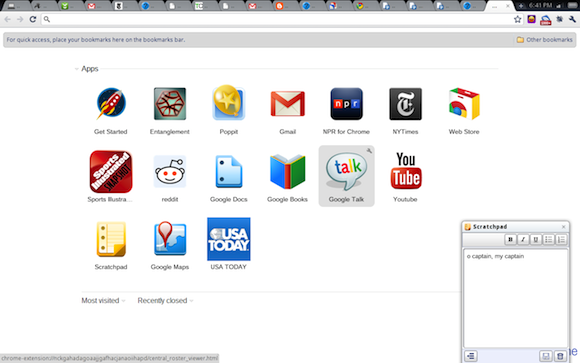 As said – so many times – you can't install local apps outside the browser. And naturally, this limits your (traditional) options. In order to use the El Reg instant messaging service of choice – Yahoo! Messenger – we had to either install a shoddy third-party-built extension for the Yahoo! Messenger network or use Yahoo!'s web-based app. We couldn't install, ahem, iTunes. But we do have the option of using a webby alternative, such as the subscription-based MOG.

Likewise, you can't save data outside the browser. But you can download files – and upload them too. When you download a file, it appears in a panel window in the bottom left hand side of your screen, and when you click on the file, it appears in a new browser tab – if it uses a browser friendly file type. Otherwise, you'll have to find a web app that can read.

Uploads are similar. When you click on a web app's upload button, a file window appears in the middle of the screen. It points to the same folder where your downloads are stored. With some sites (apparently Flash sites), clicking on an upload button brings up the OS's Linux file structure. But again, a company spokesman tells us this is a bug. 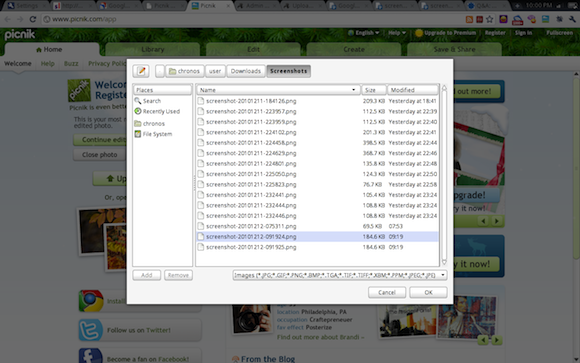