It should also go without saying that Chrome OS is close to useless if you don't have an internet connection. Some apps do offer limited offline access, such as The New York Times new installable Chrome app, and these apps will likely become more prevalent. But for the most part, if you try to use the OS while offline, you get error messages. But you can still take screenshots: 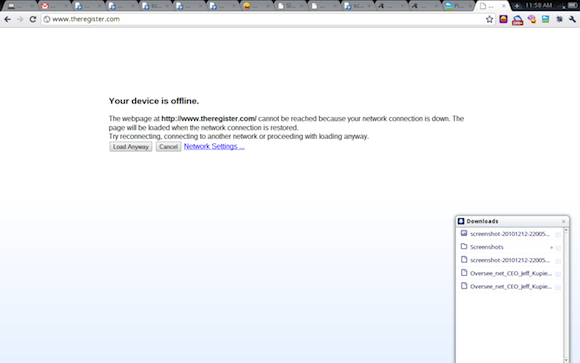 The limitations of an all-browser OS (click to enlarge)

To mitigate this inconvenience, Google includes built-in 3G connectivity as well as WiFi. In the US, Mountain View has teamed with Verizon to offer 100MB of data per month for free for the first two years, and there's no longterm contract. But to get the free data, you have to provide a credit card. Plans providing additional data start at $9.99 a day.

The networking setup is almost seamless – and wonderfully simple. Chrome OS offers limited "settings" screen that handles not only networking but other basic needs, including the system clock, passwords, privacy, and security. 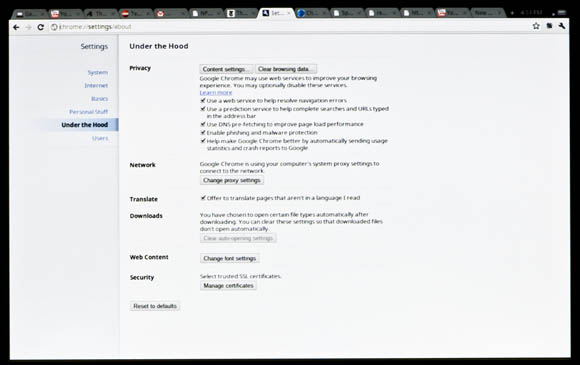 Google takes a multilayered approach to security. Every webpage and app you visit is restricted to its own sandbox, and if malware escape the sandbox, Google does a verified boot at startup in an effort to detect system tampering. Plus, like the Chrome browser, Chrome OS is automatically updated with security patches. Google calls this "defense in depth," and it's one good reason to the use OS.

The question is whether it's reason enough.

Google also pitches its Chrome OS machine as a kind of disposable computer. If you lose it, you don't lose your data or your apps. Chrome OS includes a sync tool that saves your OS settings, data, and docs on Google's servers. When you log-in with a new machine, your setup is there waiting for you.

When you consider this alongside Google's guest mode and its multilayered security, Chrome OS begins to look mighty attractive. If you're a business. And you're not adverse to storing all your company data on Google servers.

If you're the average consumer, it's likely not for you. But it is in beta. Come back in, say, another five years. ®