Black cabs "capable of zero tail pipe emission operation" will start to appear on the streets of London by the year 2020 under plans announced yesterday by mayor Boris Johnson. 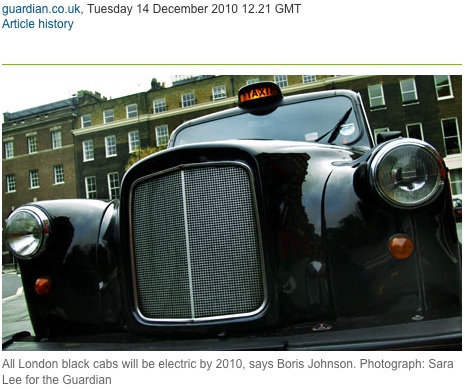 The commitment comes as part of the mayor's new Air Quality Strategy (pdf), aimed at cleaning up various kinds of atmospheric pollution which make the capital's air the dirtiest in the UK and some of the dirtiest in Europe – and which threaten to see Britain fined by authorities in Brussels for failing to rectify the situation.

According to the strategy:

The Mayor believes that London’s famous taxi trade can and should lead the world in moving towards a zero emission future. He will work with the trade and manufacturers to create a viable road map to this end. The taxi must be affordable for drivers and enhance the passenger experience.

The aim is to produce a taxi with a 60 per cent improvement in fuel economy by 2015 (based on current levels) and capable of zero tail pipe emission operation by 2020. The introduction of such vehicles will deliver significant air quality benefits. There are a variety of promising propulsion and power technologies which could see hybrid, plug-in electric, full-electric and fuel cell taxis on London’s roads in the future. The Mayor will establish a financial incentive scheme that will offer a reduction on the purchase prices of qualifying vehicles to London’s taxi drivers.

The statement "hybrid, plug-in electric, full-electric and fuel cell" is illustrative of a poor level of knowledge regarding zero- or low-emission vehicle technology at the mayor's office.

Hybrid vehicles, as most Reg readers will know, generally possess both a conventional internal combustion engine and a battery capable of being used to propel the vehicle. The addition of the battery allows the engine to be run more cleanly and economically, substantially lowering vehicle emissions.

An ordinary hybrid such as the well-known Toyota Prius gets all its power from its fuel tank: the battery cannot propel the car any useful distance without help, so there is little point in charging it up from any external source and no convenient means of doing so is provided.

However, it is possible to make a hybrid with a more capacious battery which can actually carry out short journeys without any need to fire up the engine: the Chevrolet Volt, for instance, is such a car. In this case it becomes worthwhile to plug the vehicle in while stationary, benefiting from the absence of motor fuel taxes on electricity - and cutting out emissions from the car entirely for short journeys. Such a vehicle is generally known as a "plug-in hybrid", rather than "plug-in electric" as preferred by the mayor's office.

The next step along the spectrum is actually so-called "range extended electric" in which a small motor generator is used to extend the endurance of a car intended to run primarily on battery power. This is different from a plug-in hybrid as a range-extended job can't run on engine power alone: the generator isn't powerful enough to keep it rolling once the battery has gone totally flat.

Mr Johnson's advisors have skipped this one, however, and moved straight on to "full-electric", a vehicle which has only a battery and electric drive – for instance a milk float or the well-known Tesla Roadster. They gaily add "fuel cell" as though this was a separate (and singular) field of technology: but in fact most existing fuel cell cars are also hybrids.

Next page: A few black cabs will be zero-emitters. For the first hour or so each day, anyway.
Page: