Hitachi GST has developed a single-platter 2.5-inch drive holding 500GB, a record density at this form factor in a production disk drive. 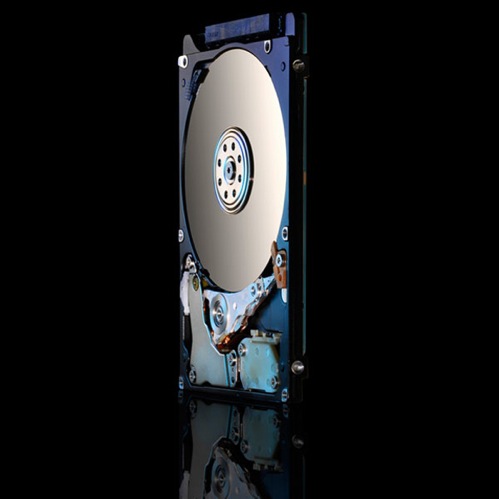 There is a G-DRIVE Slim 500GB external drive product using this disk drive.

Seagate's equivalent drive family, the Momentus products, top out with the Momentus 7200, a 2-platter, 750GB model with 541Gbit/in2 areal density. That was announced in May this year. It also has a Momentus Thin single-platter version, offering 160 or 250GB with a 380Gbit/in2 density, which also spins at 7,200rpm.

Hitachi GST's new drive holds twice as much data. The Momentus Thin was announced in January last year and could be viewed as ripe for updating.

What about WD? Its WD-AV-25 is a twin-platter drive holding up to 500GB and was announced in March. It also has a 2-platter Scorpio Blue offering 750GB capacity with an approximate 541GB/in2 areal density. This is quite like Hitachi GST's new drive with its 8MB cache, 5,400rpm spin speed and 3Gbit/s SATA interface. Were WD to halve the number of platters and move to a higher areal density, it could then produce a 500GB single platter product. So far it has avoided the single platter product category, though.

So too has Toshiba, whose best effort areal density-wise so far in the 2.5-inch space is the MK7559GSXP 750GB, 2-platter with 541.1Gbit/in2 density. It too has an 8MB cache, SATA 3Gbit/s interface and 5,400 spin speed. Like WD it has eschewed the single platter product area.

Samsung's best effort appears to be a 640GB, 2-platter product. It does look as if Hitachi GST has started delivering a new generation of perpendicular magnetic recording technology; 636Gbit/in2 is a significant advance on the state of the production art.

It can obviously produce a 1TB, 2-platter 2-5-inch drive if it chooses, and applying this areal density to its 3.5-inch products could readily produce 4TB drives. Hitachi GST is preparing its IPO and such product technology strengths would enable an eye-catching product launch to boost investor sentiment about the company.

The 500GB G-Technology G-DRIVE slim will be shipping to retailers in early Q1 2011. Pricing has not been set. The Travelstar Z5K500 family will be shipping to select distributors in December. It will come with bulk data encryption and extended availability options. ®