Another candidate to replace NASA's space shuttle in the task of carrying astronauts to and from the International Space Station (ISS) has come forward. Unlike most of the other contenders, it is a winged space plane rather than a capsule. 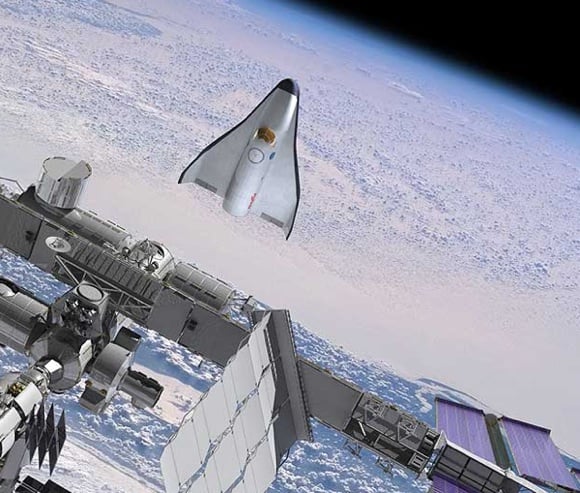 In space, nobody can hear your ship going 'beep beep beep'

Orbital Sciences Corporation, an American firm which makes satellites and launch rockets, yesterday announced its proposal for NASA's Commercial Crew Development (CCDev) plan, under which the space agency will hire private companies to provide passage to and from the ISS. CCDev is a new way of doing business for NASA, which formerly bought rockets, spacecraft etc from contractors but operated them itself.

The Orbital proposal has several important differences from today's Shuttles. The "blended lifting body" spaceplane doesn't have its own engines like a Shuttle orbiter: rather it will travel into space atop a conventional throwaway rocket stack. It will carry just four astronauts, and will dock with the space station using a hatch situated at the rear, where the Shuttle has its engines. After departing from ISS, the Orbital craft will descend to a runway landing.

Most other contenders for CCDev - Elon Musk's Falcon 9 rocket and Dragon spacecraft, Boeing's CST-100 and the Orion craft which survives from NASA's cancelled Constellation programme - are capsules, intended to re-enter the atmosphere without much alteration to their orbital track and set down by parachute. The Shuttle's spotty safety record has made many designers wary of spaceplanes.

That said, there is another winged craft contending to be a CCDev astronaut lifter, the "Dream Chaser" design submitted by Sierra Nevada Corporation. Orbital's new offering is somewhat smaller, with four seats as compared to six, and appears to have more wing area - hinting at greater "cross range" capabilities.

Next page: Rocket to be provided by the usual suspects
Page: