Rocket to be provided by the usual suspects 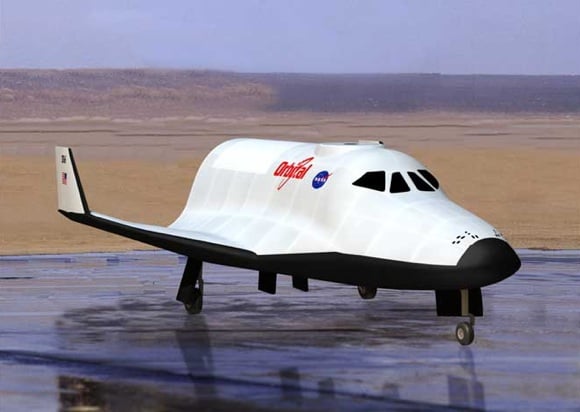 "Cross range" refers to a winged craft's ability to bend its course away from its orbital track as it re-enters. Famously the Shuttle was designed to offer good cross-range capability at the insistence of the US military, who planned cunning, secretive single-orbit missions from their space base in California. Without cross-range ability, a returning shuttle would find that the planet had turned beneath it and come down in the Pacific after a one-orbit hop.

In the end the military missions were never flown, causing heartache for those who considered that the Shuttle orbiter could have been a more capable spacecraft without the requirement for good cross-range and the resultant large, heavy heatshielded wings. There were those who had argued instead for a "lifting body" or "stub wing" design which would have offered less cross-range but more payload.

Orbital's description of their spaceplane as a "blended lifting body" suggests that cross range wasn't a big priority in the design, certainly.

Another item to note with the Orbital proposal is that this is not the same sort of effort as Elon Musk's SpaceX push to get Falcon 9 and Dragon into service, in which a new firm is producing new designs from scratch. Orbital is leading a consortium of established space heavyweights for this proposal, which would see the plane built largely by Northrop and Thales Alenia Space and the launch rockets provided by United Launch Alliance (the dominant rocketry consortium set up by Boeing and Lockheed).

This bid, then, is the established space industry moving in on NASA's CCDev cash, which many had thought/hoped would go primarily to so-called "new space" firms developing innovative equipment. Jeff Bezos' Blue Origin venture has in fact received some CCDev money, but it has no plans at present for an orbital vehicle.

The rival "Dream Chaser" would also lift atop a United Launch Alliance stack, and the Sierra Nevada six-seat spaceplane is also based on an old NASA design (as is the new Orbital one, for that matter).

The question is, does NASA want to go with existing, well proven but expensive kit - and see one or more of its old spaceplane designs fly again - or would it rather go for Elon Musk's new all-kerosene rockets and supposedly accurately-landable Dragon capsule?

Even when NASA chooses a new heavy lift rocket in 2015, this will probably not be rated to carry a crew - the Constellation Ares V was not, after all. The new big lifter will hoist the asteroid-mission and Mars ships of the 2020s into space, but their crews will probably ride up to rendezvous in orbit aboard whatever comes out of the CCDev effort.

Orbital's new plane, the Dream Chaser, Dragon and the others are all vying not just to carry space station crews - but perhaps to carry the first human on Mars for the first part of his or her journey. ®