Rackspace has acquired Cloudkick, the San Francisco-based startup that offers a web-based service for monitoring and managing sky-high virtual servers, earthbound physical servers, and – if you're so inclined – turkey smokers.

When Cloudkick was launched as a beta in March 2009, it dovetailed with infrastructure clouds from Amazon and Slicehost, and later, it expanded to Rackspace, Linode, GoGrid, and others. Then, in March 2010, the startup descended from sky-high infrastructure services to earthbound iron, letting you manage physical servers in your own data center. The service offers load, CPU, bandwidth, and memory monitoring as well as diagnostics tests, and you can arrange for it send SMS and email alerts when pre-defined thresholds are reached. 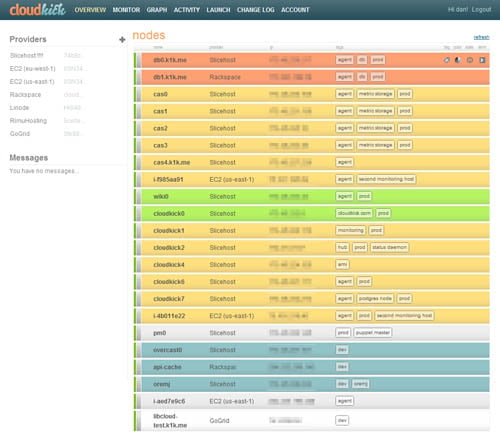 Cloudkick is among the cadre of cloud-happy outfits who have worked with Rackspace and NASA on OpenStack, the (truly) open source platform that seeks to mimic the development process for the Linux kernel, but only building infrastructure clouds. OpenStack is based on Rackspace's storage platform and a fabric controller originally developed by NASA.

Cloudkick CEO Alex Polvi tells The Reg that the company's service will continue to work with multiple third-party cloud services, but it will also be integrated with Rackspace's cloud services. "We will apply to all of Rackspace's customers at once, but we'll also offer to other customers who just want a unified dashboard for managing their server infrastructure, no matter what cloud you're on."

And, yes, the service will continue to monitor physical servers as well.

Asked if Cloudkick intends to open source its code and roll it into OpenStack, Polvi says that's "not on the immediate roadmap." But he does say that the outfit will continue to work towards tools that allow sysadmins to monitor and manage OpenStack-based clouds. "OpenStack's vision is to be like the Linux kernel for cloud deployments, so we should see a consistent cloud stack deployed across service providers an enterprise customers that want internal clouds," he says. "Cloudkick's tools will be able to be applied to OpenStack deployments."

Polvi says that his team will remain in San Francisco for the foreseeable future. Rackspace in based in Texas. Over the next year, according to Cloudkick's Bob Hrdinsky, the outfit hopes to grow from 12 employees to about 50. ®