A lattice effect in manganese silicon at -245° Celsius

German scientists in Munich and Cologne have discovered that stable magnetic vortices in manganese silicon crystals could be used to store data because of quantum mechanical effects.

In February 2009, physicists at the Technical University of Munich (TUM) and the University of Cologne, led by Professor Christian Pfleider and Sebastan Muhlbauer, discovered lattices of magnetic vortex filaments, initially because of a mis-set measuring device. The aim was to look at an aspect of the behaviour of manganese silicon, a hard and brittle material, using a beam of neutrons from the FRM II research nuclear reactor at TUM. A magnetic field for measuring this, using a MIRA instrument, was focused parallel to the neutron beam instead of perpendicular to it.

The research student, Sebastan Muhlbauer, saw a hexagonal pattern, a lattice, on the display screen instead of the expected binary pattern, and alerted his professor, Christian Pfleider. As the date was 1 April, he suspected it was a prank. But there really was a hexagonal pattern. The material had a temperature of minus 245° Celsius and a magnetic field of 0.2 Tesla, roughly corresponding to the field of a strong permanent magnet. 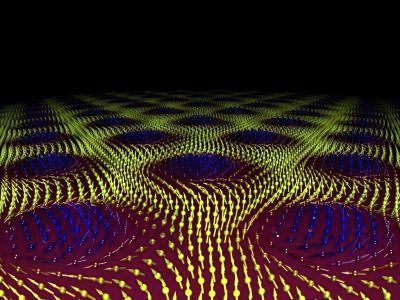 Cologne-based physicist colleagues had theoretically calculated that such vortices existed and the TUM researchers had found them. Pfleiderer said: "The vortex filaments are already unusual in themselves. It is as if the metal were a magnetic soup in which stable quantum knots form. What is even crazier is that these vortex filaments always align themselves along the magnetic field. They don’t care about the crystal structure at all. They behave like particles that can move freely in a solid body.”

The magnetic moments in manganese silicon normally form a helix. Laying three such helical structures on top of each other like a star, however, produces the vortices, sometimes called magnetic knots. Back in the 1960s a British physicist called Tony Skyrme apparently proposed that these knots were a form of sub-atomic particle, a baryon, which he mathematically modelled using topology, with his model called a skyrmion. The baryons formed a sub-atomic building block for the universe.

A later discovery, publicised this month, has found that the vortices can be set in motion by applying a fairly weak electric current. The researchers above had noticed a twist in the magnetic vortex lattice when using the neutron measurement beam, and looked into this.

Pfleiderer said: "The magnetic structure twists, because the direction of the electric current is deflected extremely efficiently by quantum mechanical effects."

Their research work showed that the magnetic vortices are very stable and yet weakly anchored in the crystal's material. They say "even the weakest of electric currents can lead to movement," noting that the current they used was a million times weaker than that used in earlier studies. They suggest that data could be stored in a recording medium using this effect, with it being possible to read and write data directly using electric currents, and to do so quickly and efficiently.

The results of their work appear in the top scientific journal Science. This is fundamental research, which means any productisation of the discovery will take years of effort. ®