MEGA DINO-WHALE from 'Valley of the Whales' exhibited

Bone-griffling boffins in the States are chuffed to announce their new and magnificent, fully assembled 50-foot-long prehistoric carnivorous dinomegawhale fossil.

The mighty Basilosaurus isis was discovered along with more than a thousand other aeons-dead whale skeletons in an area of Egyptian desert known as the "Valley of the Whales". 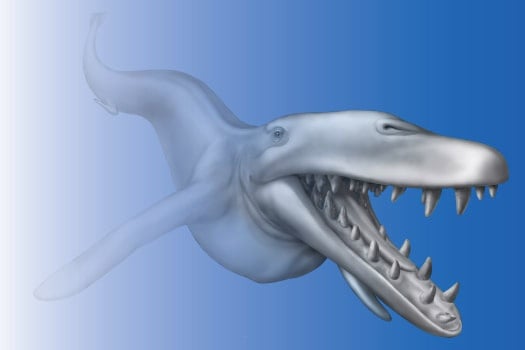 Learned to swim after it could walk.

“It’s a spectacular fossil,” said museum director Amy Harris, in charge of the whale exhibit in Michigan. “Basilosaurus looks ferocious with its big teeth, and we hope people will spend a lot of time looking at it, studying it and reading about it. The Exhibit Museum tells the story of life on Earth, and when museum visitors see Basilosaurus, they’ll be able to see evidence for whale evolution, which is one of the more interesting stories in evolution.”

According to paleontologist Philip Gingerich, whales are descended from land-dwelling life forms which began going back into the sea to scoff abundant fish and gradually became fully aquatic. Basilosaurus offers evidence to back this up, as the fossilized skeleton has vestigial legs.

The fossil from which the museum exhibit is derived was originally discovered by Gingerich and his colleagues way back in 1987. However, it wasn't until other researches revealed the chance that it had legs that the prof decided to come back to the "Valley of the Whales" in 2005 to excavate the whole thing.

Basilosaurus itself couldn't walk on land: its legs had become far to weak to support it. But Professor Gingerich has also discovered other skeletons of earlier, land-walking whales in Pakistan. Following years spent getting permission to take the whale fossils out of Egypt and then cleaning plaster protective jackets and four tonnes of sediment off the finds, Basilosaurus (actually a lightweight copy of the fossil itself) now hangs high in the University of Michigan's museum exhibition hall.

Gingerich says he's "thrilled" to finally see the mighty dino-whale on display. To help cover the costs of the operation, the museum has a "buy a bone" campaign under which people can pay to individually sponsor a bone in the fossil.

"We’re encouraging people to give a bone for the holidays—it’s an exciting and unusual gift idea. There’s no limit of sponsors per bone," enthuses Harris.

You can learn more about "Buy a Bone" and the history of whales here. ®