Light at end of 10-year tunnel for Royal Navy?

The US Navy says it has successfully launched a jet fighter into flight using a radical new electromagnetically powered catapult. The feat is important for the Americans, whose next supercarrier will be a disastrous botch without the new tech: it is even more critical for the future of the Royal Navy. 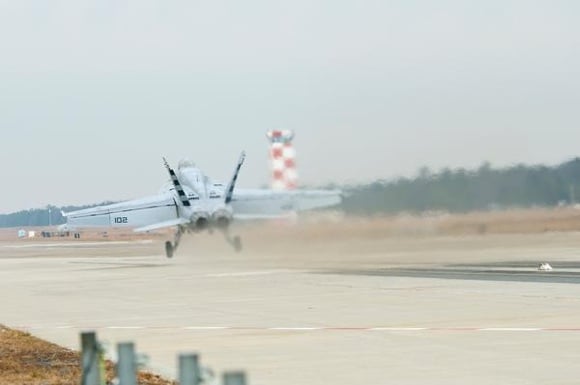 In with the new

“I thought the launch went great,” said Lieutenant Daniel Radocaj, the test pilot who flew the Hornet off the electric mass-driver. “I got excited once I was on the catapult but I went through the same procedures as on a steam catapult. The catapult stroke felt similar to a steam catapult and EMALS met all of the expectations I had.”

The "shooter" in charge of the ground team conducting the launch was Chief Petty Officer Brandon Barr, who said being chosen for the task was an honour and that "it was very exciting to knowingly be a part of naval aviation history".

The next US fleet carrier – CVN 78, aka USS Gerald R Ford – is now at an advanced stage of build, and was designed around the EMALS. If EMALS couldn't be made to work, the US Navy would have found itself in possession of the world's biggest helicopter carrier. There will be much celebration at NAVAIR following Saturday's success.

The Royal Navy, too, could feel some muted satisfaction. Though the Fleet Air Arm has been stripped of its Harriers and their ski-jump carriers in the recent Defence cuts package, Prime Minister Cameron promised that in a decade's time (provided that the next two governments agree) the RN will re-enter the world of serious maritime aviation. It will do this using one of the two aircraft carriers now being built – the other may be mothballed or even sold. If it is mothballed, however, the option would be there to have one ship up and running almost continuously: the other likely plan is to work a solo ship back-to-back with the French.

Under the original plan, the British ships were to carry the revolutionary F-35B, the world's first ever supersonic stealth jumpjet. An F-35B, like the Harrier before it, can get airborne from a ski-jump ramp with a combat load and return to the deck (having burned fuel and expended weapons) in a hover landing. Unlike the Harrier, the F-35B is also warranted to get back aboard ship still carrying a brace of heavy air-to-air missiles* – if necessary using a cunning "rolling vertical" landing, which would have been the RN's plan. Thus HMSs Queen Elizabeth and Prince of Wales would have needed no catapults, and none are provided at the moment.

But the F-35B is a tremendously complicated machine. It will always be expensive, and it is moving slowly through flight test at present. Even in 10 years it would probably be unaffordable for Britain in any numbers. The solution chosen has been to buy F-35C catapult planes instead, the type the US Navy will be getting. These are still stealth fighters (or fighter-bombers anyway, rather more useful for most purposes) but they don't need the vertical-thrust machinery of the B model. Thus they are somewhat cheaper and have improved performance in the air.

Next page: It's cool for cats, but they'll have to be electromagnetic
Page:
Corrections Send us news
57 Comments