Light at end of 10-year tunnel for Royal Navy?

It's cool for cats, but they'll have to be electromagnetic 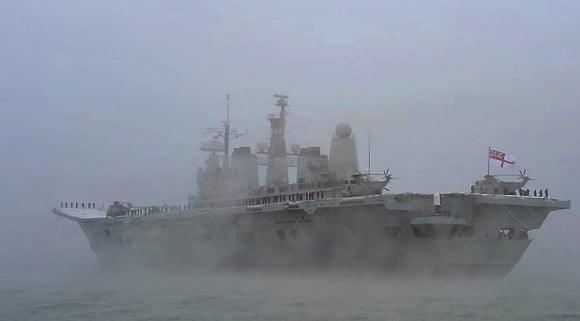 Out with the old

Fitting one or both Brit carriers with catapults is simple in one way, as space was left in the designs for this to be done. The ship or ships won't have to be rebuilt. But they don't use steam in their propulsion, so they can't be fitted with steam cats: it has to be electromagnetic or nothing. Thus the news from New Jersey at least indicates that the Royal Navy's new roadmap is feasible.

EMALS is built by famous US crazytech firm General Atomics, which has also given the world the Predator and Reaper robot kill-planes, the Blitzer railgun and many other things. It seems that GA is now the only company in the world which knows how to make electromagnetic catapults.

An MoD spokesperson told the Reg this morning that the question of who will make the UK's electro-catapults has not been decided yet. It's always possible that we'll go to General Atomics: but in general British practice is to reinvent wheels ourselves at great expense rather than simply buying them from the wheel shop. The UK tentacle of French-centred multinational Converteam – the same outfit which supplied our new Type 45 destroyers' buggy electric drive units – has already done some small-scale experimental catapult work for the MoD, and it seems likely that they will be paid to duplicate the same R&D that General Atomics has just done.

Even with the switch to catapult ships and the F-35C, however, it appears that the UK will not be able to afford very many jets. The upgraded British carrier which goes to sea in 2020 – provided nothing changes – will have an air group of just 12 planes. More might be bought down the road, perhaps; though by the time Blighty actually gets round to that the USN may have moved on to unmanned ones.

However you slice it, it will be a long time until Britain is back in the carrier game. That's not such good news when one reflects that almost every time the UK has had to fight seriously at sea since 1939, control of the skies was crucial: and that the last time Blighty had a fight on its hands for that control of the skies (Falklands, 1982) the only way to get aircraft into the fight was from the decks of ships. The RAF's fleets of land-based fighters and bombers – which we have chosen to preserve at the cost of the Harrier – were of almost no use at all**.

It's to be hoped, then, that the coming decade without any RN carrier air won't mean disaster or embarrassment. (Though of course that might lead to the replacements being cancelled.) The news from Lakehurst would seem at least to offer a small light at the end of a very long tunnel. ®

*This was why the late, great Sea Harrier FA2 fighter was binned some years ago. It could return to the deck after a patrol armed with two AMRAAM missiles in cold weather – cold air is good for planes and engines, offering better performance. But the SHAR couldn't make a safe deck landing while it was still armed in places such as the Persian Gulf, rendering its usefulness in the modern day rather questionable: a fighter needs to be able to mount routine patrols without dumping weapons after every flight.

The remaining RN and RAF Harriers which have just retired from duty are the GR7/9 ground-attack version. These were much to be preferred for strike missions, the main employment of combat jets these days: they could also be armed with Sidewinder missiles to offer a limited air-to-air option. (The original Harrier FRS1s which won the Falklands air war had only Sidewinders – but they also had the Blue Fox fighter radar, a thing which today's GR7s and 9s lack.)

**The "Black Buck" long-range bombing missions mounted from Ascension Island with the support of almost all the RAF's air-to-air tankers were magnificent technical feats but achieved very little.