Intel announced on Wednesday a new line of tiny solid-state drives, the SSD 310 series, that have performance specs comparable to those of their 2.5-inch X-25 and 1.8-inch X-18 SSD brethren – and at least one manufacturer is already on board to put the little fellows into dual-drive notebooks.

"The Intel SSD 310 series will allow us to provide the advantages of a full-performance Intel SSD paired with the storage of a hard disk drive in a small, dual-drive system," Lenovo's ThinkPad honcho Tom Butler said in a prepared statement.

A dual-drive system will allow users to put their system and apps on the SDD for fast boot and launch times, while storing their files and data on relatively pokey, inexpensive 2.5-inch hard drives. 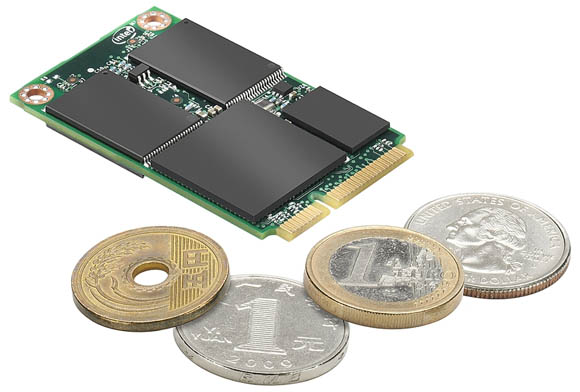 The latest example of how storage systems are shrinking

The SSD 310 series devices – available in 40GB and 80GB capacities, both composed of 34nm NAND chips – are small, indeed. Intel crows that the devices are "up to 8 times smaller than a 2.5-inch hard-disk drive," but that characterization takes all three axes – width, length, and thickness – into account. 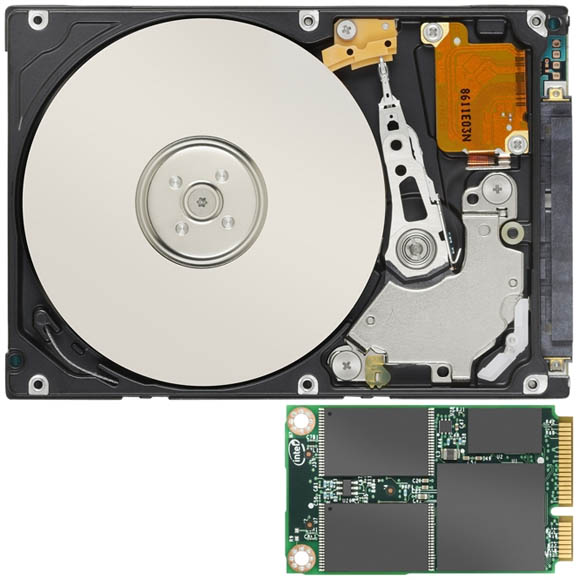 Ten years ago, would you have thought a 2.5-inch drive could ever look so gargantuan?

Although comparing an SSD's sustained read/write rates with Hitachi's advertised media transfer rates is not as exact a comparison as we'd prefer, it's what we have to go on:

If not exactly apples to oranges, perhaps at least Granny Smiths to Gravensteins