“Since 1978, O'Reilly Media has been a chronicler and catalyst of cutting-edge development, homing in on the technology trends that really matter and spurring their adoption by amplifying "faint signals" from the alpha geeks who are creating the future. An active participant in the technology community, the company has a long history of advocacy, meme-making, and evangelism.”

“As for digital, I am with the utopians”

Rupert Murdoch is attempting to create a market for newspaper content - by reinventing the newspaper bundle on an iPad, and charging a subscription for web access . The Telegraph is following suit with its own pay-to-play scheme. But The Guardian's editor Alan Rusbridger bravely keeps the faith. There will be no money lenders in his temple. 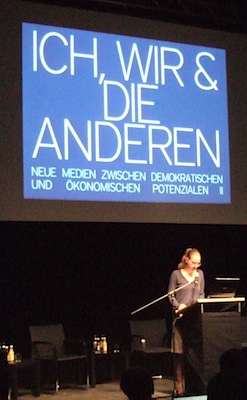 “Personally I think the internet-improved journalism will involve sub-editors, because language is a virus”

Like a brilliant Teutonic meteor streaking across the sky, shedding sparks of sociological speculation as she buffeted the atmosphere of Web 2.0, Dr. Mercedes Bunz lit up our lives too briefly. She has now departed from The Guardian's tech pages, leaving us sadder and a little more less unwise. El Reg's own bold experiment with post-modern analysis sadly lasted only one day - as visiting Professor of Gender and Social Media Communications at the Hans Krankl School of Art at Bad Krautspröse, near Innsbruck Porsha Kling has returned home.