Skype has released version 3.0 of its iPhone app, which adds video-calling capabilities to its internet-telephony tricks.

Two-way video calls using Skype for the iPhone can be made over both Wi-Fi and 3G connections using an iOS 4.x-equipped iPhone 4, iPhone 3GS, and fourth-generation iPod touch – although the iPhone 3GS's lack of a front-facing camera and slower processor make calls using that device a somewhat less than satisfying experience, as Engadget discovered in their testing. 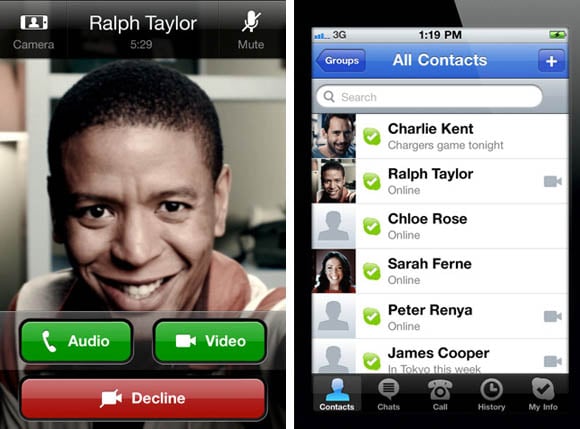 In addition to handheld-to-handheld video calls, the new app can initiate and receive calls from the desktop Skype app on both Window machines and Macs. Camera-less iPads and third-generation iPod touches can also receive calls – although, of course, they can't display their users' mugs on devices at the other end of the call.

Group video calls – still in beta – are also supported, as are paid text messages and landline calls. Group calling is featured in an oh-so-hip – and mildly disturbing – demo video provided by Skype:

With its ability to make video calls over 3G connections, Skype for iPhone will almost surely be a formidable competitor to Apple's FaceTime video-call feature, which is currently limited to Wi-Fi.

Skypers have been clamoring for mobile video, according to the company's consumer headman, Neil Stevens: "With video calling representing approximately 40% of all Skype-to-Skype minutes for the first six months of 2010, our users have been eager to get Skype video calling on their mobile phones," he said in a canned statement.

Don't expect high-quality video, however, over 3G connections. As one App Store reviewer commented: "video chat works, but its very laggyyy and quality should be better. Theyll prolly fix this soon but i thought id let u guys know."

The release of the video-enablled app comes one week after Skype suffered a global meltdown, and one day after the company's CIO explained the cascade of pain that caused that debacle.

Skypers will understandably be crossing their fingers in the hope that the new iPhone app has been more thoroughly vetted than Skype for Windows version 5.0.0.152, which contributed mightily to last week's takedown. ®