But will punters really buy a new laptop for PC-to-TV streaming?

CES 2011 Intel's Wireless Display (WiDi) technology entire failed to take off after it was launched a year ago during the 2010 Consumer Electronics Show (CES). One year on, and the chip giant has taken the wraps off WiDi 2.0. Can it fare any better?

The new release is certainly better. Developed to stream your computer's screen over your 802.11n Wi-Fi network to your HD TV, WiDi lacked some key qualities: the ability to stream a "full HD" 1080p image, and support for encrypted DVD and Blu-ray material.

Intel has fixed these issues, giving WiDi 2.0 1080p support and letting it stream any disc you play. 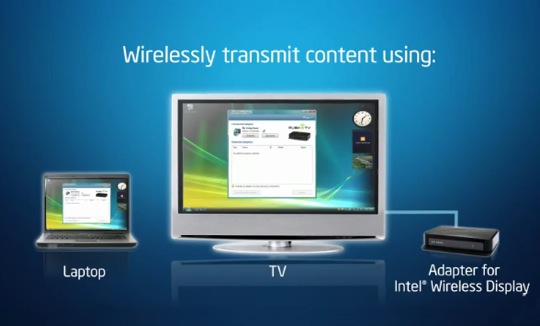 Streaming needs a receiver, of course, to connect wireless network and telly, and decrypt the WiDi stream. The good news here is that with the introduction of WiDi 2.0, rather more vendors have signed up to offer such pick-up units.

WiDi 1.0 was supported solely by Netgear, and its receiver was marketed only in the US. This time round, it has been joined by Belkin, Buffalo, D-Link, IO Gear and Logitech, and some of them will certainly make it to Europe and the UK.

Interestingly, the $30 (£19) compact Apple TV lookalike box from Logitech will be audio only, aimed at punters who want to stream music from iTunes and suchlike to their hi-fi. Rather than the usual WiDi receiver HDMI port, the Logitech box has RCA jacks instead.

The Logitech WiDi box will be out in May. The D-Link MainStage and Netgear's second gen Push2TV will be out in Q1, the D-Link for under $150 (£97), the Netgear for $120 (£78). Belkin, Buffalo and IO Gear haven't announced their WiDi offerings, but Intel had their boxes on its CES stand.

WiDi receivers will be more commonplace than they were in 2010, and if Intel's forecast that 33 per cent of its revenue will come from its second-gen Core i processors - aka 'Sandy Bridge' - this year, so too will PCs equipped with the WiDi 2.0's other key requirement: one of the chip giant's new CPUs.